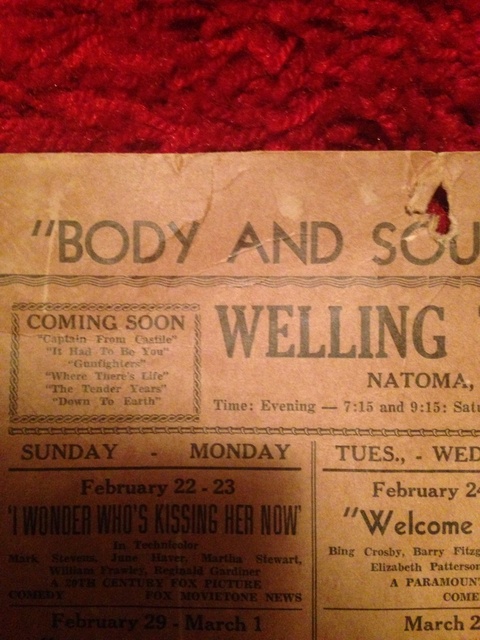 The Welling Theatre was opened prior to 1948. The Theatre was still open in 1961. The auditorium has been leveled and remodeled and is now used as The Natoma Community Center.

Boxoffice of April 24, 1948 reported that the Welling Theatre had reopened after renovations. The $5,000 project included new seats, carpeting, and screen, plus redecoration. The Welling closed and reopened more than once during the 1950s, and in 1966 the February 7 Boxoffice said that local merchants had reopened the house for Saturday shows only, but hoped to add Friday shows soon. That was the last mention of the Welling I’ve found in the trade journals.

From at least as early as 1925, Natoma had a 200-seat movie house called the Reel Theatre. Manager H. P. McFadden sent capsule movie reviews to Moving Picture World into 1927. Natoma then had a population of only about 600, but probably drew business from a significant rural population in the surrounding area. I’ve been unable to discover if the Welling was the same house as the Reel, but the Welling’s building looks like it dates from no earlier than the late 1930s, so if it was the same theater it must have been quite extensively remodeled.

Added a couple of posters from 1960 and 1961 listing current films showing at the Welling.