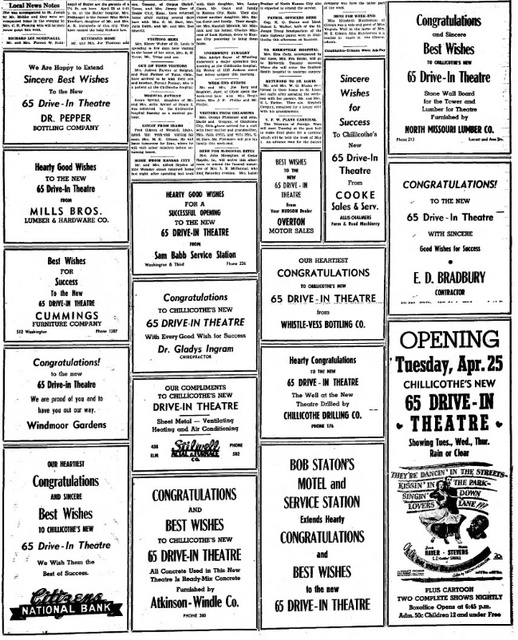 The address for this drive-in was 2600 N Washington St. Now Cornerstone Church.

Angelo Saccaro and Merl Jones opened the 65 Drive-In on April 25, 1950 with “Oh, You Beautiful Doll” on the big screen. The 45x40' tower with a 27'x38' image was in for the long haul remaining in place until being torn down in 1987, just a year after its 27th and final season completed. Sacarro bought out Jones in 1959 and the theater stayed in the Saccaro family until the final showing. Annual “Mud-a-thons”, Sunday morning drive-in church services, and Kool Kart go-cart racing were just some of the additional features at the 65.

The Saccaros added a car wash in the drive-in’s 16th season to increase revenues which was a good idea as the fortunes of the 65 faded in the 1980s. At the very end, the 65 had turned to X-rated fare and closed with Hyapatia Lee’s “Let’s Get Physical” on September 13, 1986. The announcement of the non-opening in 1987 didn’t come until June of 1987 when the decision was made to not only not open but to raze the 65 occurring that October.

Also opened with a cartoon(not named).