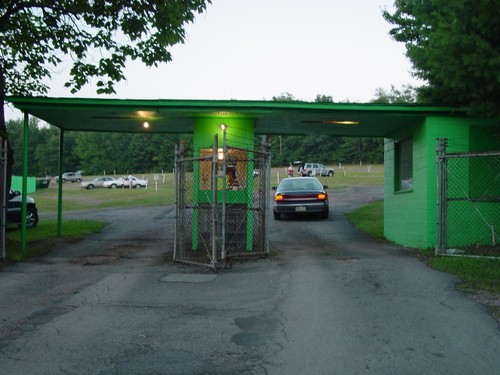 The Bar-Ann Drive-In opened in 1954. It can accommodate 300 cars. The drive-in is open seasonally May through September and has made the conversion to digital projection and sound.

Its first appearance in the International Motion Picture Almanac was the 1956 edition when it was listed as simply “Drive-In”. In 1957-66, it was the Bar An (sic), Geo. Wasko, Hanna Theatre Serv., capacity 276.

The IMPA didn’t fix the name until 1978 when the Bar Ann was still owned by G. Wasko. It stayed that way through the final list in 1988.

The drive-in was advertised in 1985-87 in the Altoona Mirror as Wasko’s Bar-Ann. A July 1985 article said that Wasko had owned the drive-in “since its construction in 1955.”

The June 30, 1991 Altoona Mirror, found at NewspaperArchive.com said that the Bar-Ann had recently reopened “after a three-year hiatus”. The article said that George Wasko named the drive-in after his two daughters, Barbara and Peggy Ann. The original idea came to him “in 1955 after a vacation trip”. He had installed radio sound “during the theater’s most recent season”.

The article continued: The Bar-Ann itself was in limbo for three years. “I had a bout with cancer,” said Wasko, who said he has since received a clean bill of health. And with the return of health came pleas from townspeople to restore nighttime entertainment to Portage, according to Wasko’s wife, Peg.

Wasko’s 1995 obituary said that he owned and operated the Bar-Ann from 1954 to 1994, as well as an assortment of other businesses.

When the Bar-Ann had a flap over its sign in early 2014, its owner was Don Gawel, who spoke through the drive-in’s manager Dustin Grush. Once that was cleared up, it converted to digital projection.

As of Labor Day weekend 2017, the Bar-Ann is still going strong.