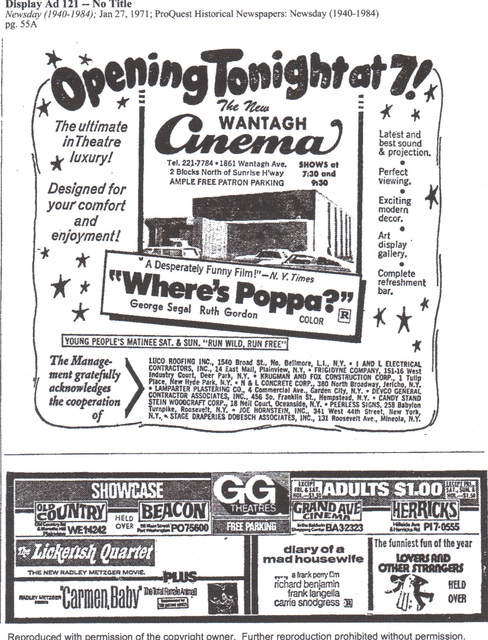 Not to be confused with the Century’s Wantagh Theatre, which was two blocks away. This was a discount house that was twinned and died a few years later in the early-1980’s. Demolished in the 1980’s, a new building on the site currently contains a Sea Food Market/Grill and offices.

I saw Peter Pan there in the early 80’s. It sat abandoned for a few years then was demolished for a retail store. It was on Wantagh Ave about a block north of the train station.

This theatre was called Cinema Wantagh.

I saw a lot of movies here in the 70’s. It was in a shopping center, no balcony. Not big, not small. Saw “The Sting”, “Hard Times”, “Obsession”, “Poltergeist” when it was doubled.

Check this ad out for “Song of the South” the theatre was known as Cinema Wantagh. View link

We from the “T” section of Levit houses used to go to the midnight shows back in the late 70’s. We always called it The Wantagh Cinema. Cinema Wantagh sounded odd I guess. But we’d walk the 2 mile stretch down Wantagh Ave on weekend nights when I was in high school (MacArthur) to see Yessongs and Song Remains the Same. I can still see Steve Howe performing “The Clap"
Here is an ad for that show.
View link

Local merchants have confirmed that the theatre was demolished in the 1980’s. The replacement building houses a Fish Market/Grill and a number of officces.

At one point, this was part of the Jerry Lewis chain of movie theaters. As a kid I felt it was like having a celebrity in town.

A few blocks from my home growing up, so I practically lived there in the early-mid ‘70s. This was never part of the Jerry Lewis chain, as suggested, that was in Massapequa on Sunrise. Also, this was located downtown near the 5 & 10, far more than two blocks from the Wantagh Theatre on Jerusalem Ave as stated above, more like a mile. But that aside, this was a mostly second-run discount house, it usually ran double features (with the above noted “Where’s Poppa?” as a frequent second bill). It also sometimes had indie releases of that era, like “The Legend of Bigfoot”.

They also had children’s matinees on Saturday. I remember as a teenager seeing a re-release of “Jack the Giant Killer” at a matinee. I stayed for the end of the credits (as always) and when the curtain closed the doors suddenly opened and a stream of people came in. I sat and remained, scared I’d be caught, but no one noticed so I stayed for a double bill of “Charley Varrick” and “The Don is Dead” (thus it must have been 1973).

The staff were always very friendly. And at some point they were privately selling posters and pressbooks. I bought the pressbooks for “Chinatown” and Godfather II", along with the poster for “Taxi Driver”, each a buck or two.

Appears in the Newsday Movie Timetable for April 6, 1982.