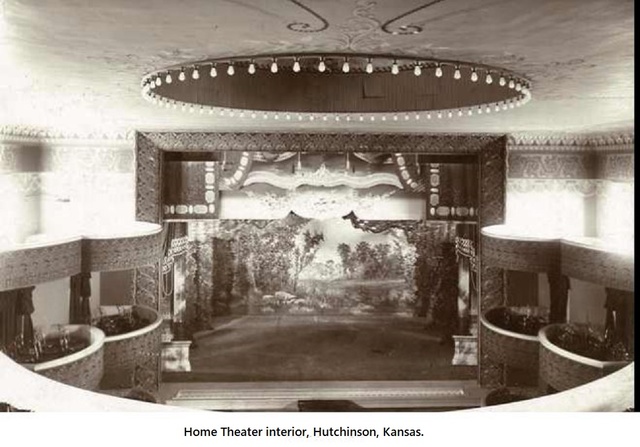 The Home Theatre was mentioned in the Hutchinson News as early as 1902. Here are excerpts from “This was Hutchinson” in the Hutchison News on August 28, 1967:

“Hutchinson’s Home Theatre was the most ornate and modern theatre between Kansas City and Denver for many years. It showed the leading attractions of the American stage, drama, and comedy. The Lyman Howe moving pictures also were shown. Entrance to the theatre was through the arched doorway into a commodious lobby. However, theatre fans who sat in the cheaper plank seats in the top of the auditorium entered by a side door, never contacting the better paying customers. The theatre met its doom in the 1929 flood when the stage and its high domed sets storage collapsed. The day of the traveling troupes was coming to an end anyway.”

The Home Theatre was closed by 1926. It was reported in the news on December 14, 1928 that contractor C.L. Burt had purchased the old Home Theatre building. At that time it was reported that the theater used to be called the Shaw Theatre. Mr. Burt apparently was Hutchinson’s busiest contractor as the Hutchinson News is filled with his projects. The C.L Burt building, at the location today, has been there since 1929.