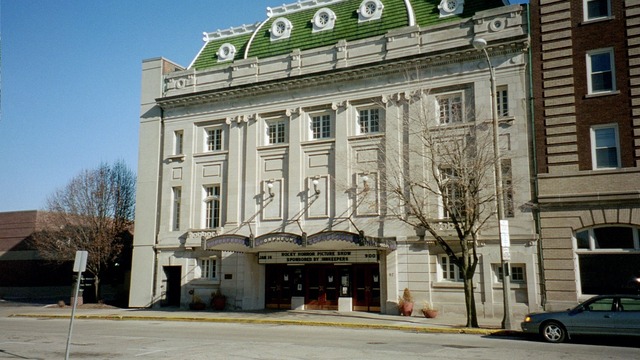 When the Orpheum Theatre opened on August 22, 1916, it was called a veritable house of enchantment.

Designed by Rapp & Rapp in the Second Empire style of 19th century France, George Rapp called it a shrine to democracy, where the wealthy rub elbows with the poor. The theater’s interior was designed in the French Renaissance style, complete with gold leaf and ornate plasterwork. The exterior was a pastiche of neo-classical and French Second Empire styles.

The Orpheum Theatre is now host to the Prairie Players Community Theater, the Knox-Galesburg Symphony Orchestra, and many touring performers. Tours are available and visitors are welcome. It is conveniently located just off of Interstate 74.

I just heard about this Rapp and Rapp theatre through a friend who lives in Normal Illinois.

The Orpheum Theatre in Galesburg is the subject of this Flickr account. There are 17 photos, including several well-lit interior shots.

Gregory Waller’s 2001 book Moviegoing in America contains an extract from a 1948 Fortune Magazine article titled “What’s Playing at the Grove”, which includes the information that the Orpheum and the West, the two largest of the five theatres then in town, were operated by Publix Great States, a downstate circuit run by Balaban & Katz of Chicago, which was controlled by Paramount. The Colonial Theatre (next door to the West, and later incorporated into it as the second screen of a twin cinema) was associated with the big chain.

According to the article, in the 1940s the Orpheum had a seating capacity of 1105.

Dr. John Near saved the organ from the Galesburg Orpheum Theatre in 1964. Over three years he cleaned, repaired and installed the Barton in his parentâ€™s home outside Galesburg, IL. When Mr. and Mrs. Near passed away and the home was sold the organ needed to be removed. John and his brother tried to give it back to the Orpheum Theatre but there was no interest in bringing the organ home. At the same time, the Grand Theatre in Fitzgerald, GA was looking for a pipe organ to install in that theatre which has been renovated and is active. The Orpheum Barton was donated to that theatre, has been professionally restored and is being installed in the Grand by the A.E. Schleuter Pipe Organ company of Atlanta, and will premiere on March 26, 2011 with a concert by Jelani Eddington.