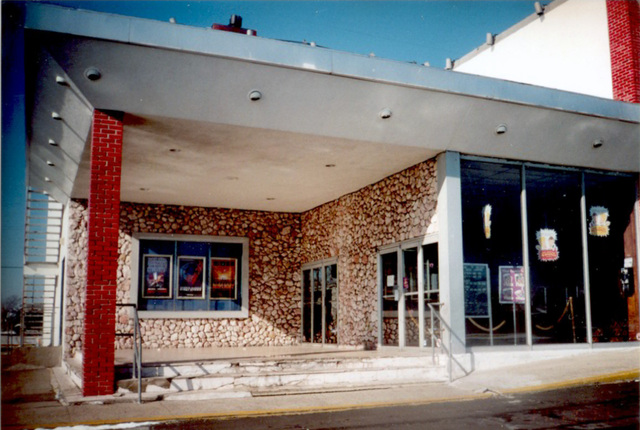 Built by RKO it opened as the RKO Twin Theatres on August 23 1967, its opening program on both screens was Robert Redford in “Barefoot in the Park”. It was a first run theatre. Each auditorium had 750 seats. It was triplexed on February 1, 1980, and the theatre quietly closed on October 19, 2000. It became a Duane Reade pharmacy and later a supermarket which has since closed.

The theater building was turned into a supermarket about five or six years ago. It failed and the building remains empty today.

It was a Duane Reade pharmacy for a while. I have photos from 2006 showing the Duane Reade still in full swing. I go to the Costco near there from time to time and hadn’t noticed what the state of the occupancy is.

Grand opening ad posted open with Barefoot in the park

So, did it open with “Bonnie & Clyde” or with “Barefoot in the Park”?

Al Alvarez, if you look in the photos section someone posted a Grand Opening picture of the theatre Barefoot In The Park. The original name was RKO Twin Rockaway Blvd, it was rename Lawrence Triplex when it was closed. The theatre was later operated by RKO Century, Cineplex Odeon and when it closed, Loews Cineplex.

Please update, theatre open with Barefoot in the Park on August 23, 1967 (display ad Posted), theatre became a triplex on February 1, 1980 (The Red and Gold theatre became Theatre 1 and 2 divided up the middle, both screens Mono and Theatre 3 was Dolby Stereo. Dolby was installed in 1977 for Star Wars. The theatre closed on October 19, 2000. When Loews Cineplex took control in 1998, they show mostly move overs from Rockville Center and Fantasy locations prior to its close.

This theatre had absolutely no competition after the Five Town closed. I never understood why RKO and then Cineplex used this as a move over and dumping house. In the olden days with huge booking Zones Lawrence would never play day and date with Fantasy or RVC Twin but that practice should have been dead in later years.

unforatley, it wasn’t until 2016 when that competition was allowed like E-Walk and Empire showing the same pictures. Im the 90’s Lawrence and Lynbrook would show the same movies but Cineplex Odeon and Loews Cineplex would’t play date with their own theatres