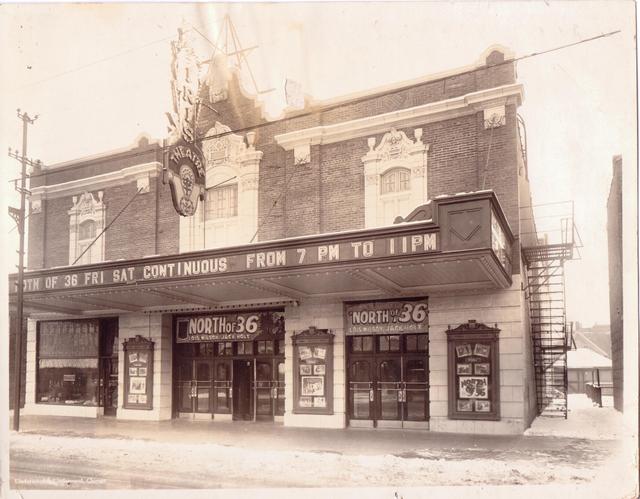 The Iris Theatre is located in Chicago’s Austin neighborhood which borders the suburb of Oak Park, stood on Chicago Avenue between Massasoit and Waller Avenues. The Iris Theatre was opened on December 21, 1913 for the Simansky and Miller circuit, which also included, among others, the Savoy, Park and Windsor Theatres during the 1910’s.

In the 1920’s, the Iris Theatre was acquired by the Balaban & Katz chain. The theater closed in 1952, and was first converted into a banquet hall, and later became a church, which it still serves as today.

The Iris still is in existence as a church.

I have a photo of the exterior of the Iris when it was in existence
as a theatre. Will post it when posting is once again available.
Bill DeMar

I grew up in that neighborhood in te 50’s . I lived 942 N. Waller Ave. My father was born in 1907 and lived there most of his life. I was under the impression that the theater was razed and then Chateau Royale was built. Some how I remeber it changing to the Vet. You can see a picture of it the way it looked in 2000 at www.cookcountyassesor.com Put in the address and it will come up. Although its not a great picture, you can still see part of it.

It is interesting to hear your comments on the Iris. As I previously
stated, I do have a photograph of its Exterior and do remember viewing various films there, although I lived much closer to the
Symphony and Vet, which were both east of Laramie Avenue.
The Vet theatre was previously called the Lucille and then the
Ohio and finally after world war 2 ,, the Vet. It was located
just off of Huron and Cicero, second building on the east side of
Cicero, and the Iron support structure for the marquestill exists above the present building.
I have never seen a photo of the Vet, unfortunately.

Memories don’t serve us well sometimes. I was very young when the theater closed. The story was that a Veteran bought the theater and changed the name from the Iris to the Vet. What I do remember is, and talking to my brother about this, was the construction of the parking garage next to the Chateau. The Banquet Hall was already there at this time, but it looked new on the inside and out. Would love to see the picture of the Iris.

How accurate is the address for this theater?
If you click on the map above you can see a street view. The Mount Olive church is further west in what definitely looks like an old theatre front. Google shows it at 5766 or 67 w Chicago Avenue. I also noticed a discrepancy with the Hub theater. Of course the google address may be wrong. BTW for all those interested in what the area looks like nowadays ,at least in most of Chicago, click on the map next to the address and click on street view. You can rotate around or wander up and down the street. All of Manhattan seems to be covered as well. Cheers.

If you ever wondered how “Bank Night” worked in the 1930s, this case should answer your questions.

The Iris Amusement Corporation filed its amended complaint for injunction in the superior court of Cook county, seeking to restrain the mayor and commissioner of police of the city of Chicago from interfering with its conducting a gift enterprise known as “Bank Night.” Afterwards, the Balaban & Katz corporation and several other theatre owners intervened as co-plaintiffs.

Quite contrary to plaintiff’s argument, the element of price is present. As the Massachusetts court said, we may look at this thing realistically and sensibly. We know that those within the theatre pay for any chance anyone outside may have to win. Furthermore, we know that the chance of an outdoor participant is decidedly limited by the requirement that he reach the stage in a short time. We know that if any appreciable number of outside persons are to participate in the drawing they must loiter on the street, obstructing normal traffic, and that they must crowd the lobby and theatre exits to the danger of those within. The price for a fair and reasonable chance to win is the cost of a ticket of admission to the theatre, which is the object of the plan, and thus a lottery is completed, even under plaintiffs' own definition and contention.

Our public policy against lotteries expressed in two constitutions, in the Criminal Code, and in the ordinance before us, is much too firmly rooted to be evaded by any chimerical device. Our conclusion is that the operation of the scheme outlined in the amended complaint constitutes a lottery and that the plaintiffs have no standing in a court of equity for its furtherance or protection.

The superior court correctly dismissed the complaint for want of equity, and its decree will be affirmed.

Here is a THSA photo.