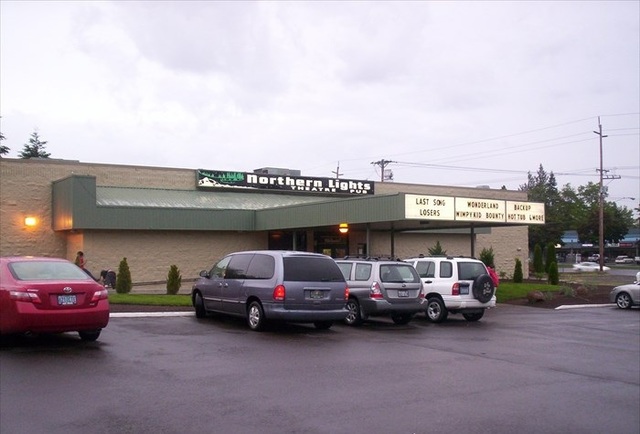 Opened as Southgate Cinemaworld on June 16, 1976. It had a 400-seat auditorium and two auditoriums each with 200-seats. It was closed in 1999. Northern Lights Theatre Pub has found its niche with Portland moviegoers since March 21, 2004. The pub offers second-run movies with digital projection on all three screens.

They also present stand-up comedy, sporting events, and food & beverage and they’re available for private showings and birthday parties. It was closed on August 29, 2020 screening “The Greatest Showman”. It had reopened on March 24, 2022.

The Southgate Shopping Center opened theatre-less on 3893 S.E. Commercial Street in 1960. General American Theatres, operator of the Lancaster Mall Quad Cinema, two local drive-ins, and two downtown theaters constituting a local monopoly, built an addition to the plaza. The $450,000 three-screen operation with a 400-seat auditorium and 2-200 seat auditoriums was architected by Dick Ebeling & Associates of Portland. It was one of four new-build theaters being built in the area including an identical but ultimately delayed Keizer location triplex by GAT.

The Southgate Cinema Center opened on June 16, 1976 wit two theatres ready to go and Walter Matthau and Tatum O’Neal in “Bad News Bears “ and Jan-Michael Vincent in “Baby Blue Marine” on a double-bill with Lisa Oz in “Drive-In.” Act III Circuit took on the venue and then merged with Regal Theatres in 1998. Regal closed the Southgate in 1999 along with its sister triplex, the Keizer Cinemas 3.

On March 21, 2004, the venue was reopened under independent operation and reducing the theater sizes to 144, 86, and 70 for a total of 300 seats. It relaunched as the Northern Lights Theatre Pub. The Northern Lights Theatre Pub closed on March 16, 2020 for the COVID-19 pandemic. It reopened briefly but faded away on August 29, 2020 with its final shows being private theater rentals and the last scheduled show was a repertory run of “The Greatest Showman.” Under new operators, the venue relaunched two years later on March 24, 2022.