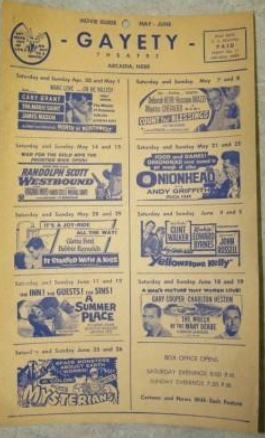 The Electric Theatre, Arcadia, Nebraska, operated by P. E. Doe, was mentioned in the April 7, 1923, issue of Exhibitors Herald. Doe later had several capsule movie reviews published in the magazine’s “What the Picture Did For Me” feature, including this one from the May 26 issue:

“THE STORM, with House Peters. — An extra fine picture, but I advertised strong on it and brought an honest-to-goodness storm — a blizzard, the Saturday I had it booked in March, so didn’t make anything on it.

“Universal very kindly returned it for one night and that time it brought a big rain storm, which kept the crowd away.

“Now all the farmers want me to get it during the dry spell we usually have in July. Best forest fire scene in this I ever saw.

The Strand Theatre launched in Arcadia (though not necessarily here) on July 2, 1930 with talking pictures.

On April 30, 1956, after playing Dean Martin and Jerry Lewis' “Artists And Models”, the theater closed its doors for a time due to their owners moving out of Arcadia to their hometown of Farnam. This left the theater to close for a couple of weeks until being purchased by Delilia Nelson, who reopened the theater on May 18, 1956.

The theater operated until 1974, when the theater was destroyed by a tornado during the April 18-21, 1974 tornado outbreak.

Uploaded a photo of a 1959 flyer for the Gayety.