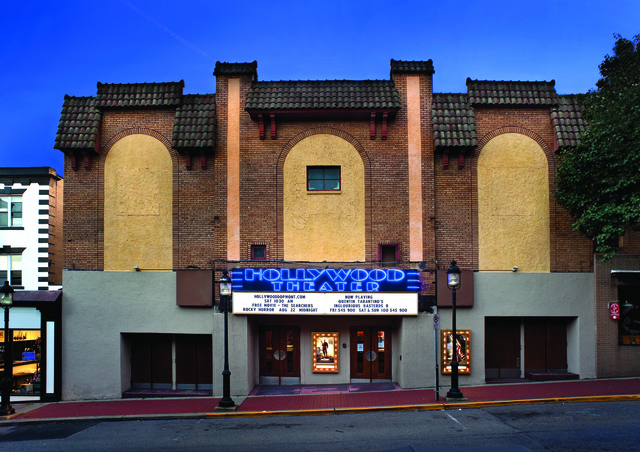 The Hollywood Theater is the last of three theaters that once stood in the southwest Pittsburgh suburb of Dormont, PA. The building was first constructed in 1925 and has undergone one major reconstruction and several remodelings. Throughout the multitude of ownerships and operators, the theatre doors have been shut for a total of 17 years of its lifetime.

The Murray’s Theater first opened as a silent picture house ‘on or about Labor Day’ 1922 under the control of Edward James Murray, a founding member of the Hollywood Amusement Company. The building had two store fronts and a bowling alley in the basement, sometimes referred to as ‘Murray’s Bowling & Billiards’. The most impressive portion of the building, however, was its lavish Atmospheric style auditorium, seating 700 seats in orchestra and balcony. It had a courtyard interior, and stars in the ceiling. “Where the moon and the stars shine” was an appropriate tagline for the new theater, used greatly during its early years. The architect of the original building was Charles R. Geisler of Pittsburgh. Construction was contracted to H. Justine Brown at a cost of approximately $70,000. In early-1927, E.J. Murray transferred ownership of the building to the Hollywood Amusement Company, a company in which he was a shareholder.

The theater was a prominent meeting place throughout the late-1920’s. Guest speakers frequented the theater, the Dormont New Century Club being known to sponsor many. The club consistently used the space as a meeting place as well. Other highlights include the hosting of the ‘Miss Dormont’ contest, presentations of visiting Iroquois Indian Ho-Gaw-Das, and the publishing of a monthly paper titles “Hollywood News”.

The Hollywood Theater was purchased by Warner Bros. Circuit Management Inc. on June 11, 1930 for $200,000. Operation continued as usual until late-1932 when doors were closed. An initial theory for its closing is the large number of movie houses the Warner’s had in the area. In 1934 Harry Kalmine, zone manager for Warner’s, decided to reopen the theater for weekend showings. Upon reopening November 2, 1934, the theater had received its first sound equipment and a new screen, among other remodelling and redecoration. Prior to this, films were projected on the back wall.

The theater again saw success through to the mid to late-1930’s, partially due to the showmanship of well known manager Chuck Shannon. Other area managers during this time were Harry Koch, Larry Huttinger, and Henry Berger. The store fronts, still in use, housed a dry cleaner and a flower shop for much of the time. On February 11, 1939, Warner Bros. transfered ownership to its subsidiary, Northeastern Theatres Inc.

The outbreak of World War II caused the manager to recycle several managers in the early to mid-1940’s, among them Dave Smith, Bud Mayer, John N. Carroll, and Jean Porter. The seating capacity in 1943 was 800.

The doors of the theater were again closed on April 19, 1948 for yet another remodelling and upgrade. This time however, the interior of the theater was completely removed except for the superstructure. Architect Victor A. Rigaumont designed the reconstruction which removed the store fronts and bowling alley, expanded the seating of the auditorium, and removed the Atmospheric style effects in favour of a more modern style. Different outlets report the expanded seating capacity as over 1,000, with some claiming close to 1,500 seats. The front facade of the building remained, however the original cast-iron marquee was replaced with an impressively lit Warner Bros. themed marquee. The building reopened on November 5, 1948 with a showing of Alfred Hitchcock’s “Rope”, and soon became the highlight of the Warner’s chain.

Warner Bros. again transferred the theater to a subsidiary in 1953, this time Stanley Warner Theatres. Notable employees from this era are Edgar Lewis, Jim Laux, and Joie Vance. Doors remained open until another extensive remodelling in 1966, when approximately 750 new seats, fabric, wallpaper, and a wider screen were installed. A green and gold color scheme would now welcome theater goers.

1973 would see yet another transfer of ownership of the building, this time to Cinemette Theatres Inc., who operated the Hollywood Theater as a second-run theater until 1979, when they defaulted on a majority of their loans. Major creditor, Ernest Stern, purchased Cinemette Theatres and their assets at this time, adding them to his already extensive network of Pittsburgh theaters.

In July 198, Potomac Avenue was widened and the Borough of Dormont paid for the removal of the large Warner Bros. era marquee. Earlier that year, the projection equipment received a much needed upgrade as well. Business was not booming as one would hope, as Cinemette reportedly owed several thousand in back-taxes to Dormont Borough this same year.

On April 18, 1988, Ernest Stern ceased operations at the theater with a showing of “The Fox and the Hound” and “Frantic”. Stern had recently sold most of his theaters to Cinema World in 1987, but had retained a handful of theaters, among them the Hollywood Theater.

The doors opened again on June 1, 1990 under the management of Neighborhood Cinemas, Inc. who leased the building for a trial year. Opening films were “All Dogs Go to Heaven” and “I Love You to Death”. President David Bevilacqua had previously renovated and reopened the Rex Theater, another Pittsburgh theater. Business was booming with over 2,000 people frequenting the theater per week. Not long after opening, the theater received a sound upgrade on September 13, 1990.

April 2, 1995 was the final day of operation under Neighborhood Cinemas with a showing of “Steel Magnolias”, but doors were not closed for long. Rick Stern, son of the late Ernest Stern and now the building owner, reopened on June 1, 1995 under the control of his CineMagic name. His first films were “Johnny Mnenomic” and “The Pebble and the Penguin”.

The doors were closed yet again on April 2, 1998 with a showing of “The Wedding Singer”, “The Borrowers” and “Twilight”. The building was later purchased by the Keystone Oaks School District and the Borough of Dormont at sheriff’s sale for extensive back-taxes on May 4, 1998.

On March 5, 2001, the building was purchased by a group under the name Hollywood Partners, LLC. However, the Hollywood Theater would not see its doors open again for quite some time.

March 30, 2007 finally saw the reopening of the Hollywood Theater after almost 10 years. The building, now operated by the Bradley Center of Mt. Lebanon, PA, undergoes a complete renovation. The lobby is made larger, and new paint, fabric and seats are installed. The auditorium now seats a meagre 285 seats due to updates in building code. A digital projector that can play DVD’s is introduced alongside a classic 35mm projector. Opening attractions were “Dreamgirls” and “Night at the Museum” with the theater playing second-run films.

A little over a year later, on Monday May 26, 2008, the theater closed again. The theater reopened on July 10, 2009 under Motion Picture Heritage Corporation, but closed again less than a year later on June 1, 2010.

A year later, the Friends of the Hollywood Theater opened the doors May 4, 2011, and has been consistently playing art house movies and hosting events ever since.

On February 23, 2018, the theater was reopened by the Theatre Historical Society of America, and is now operated as a first-run theater that also hosts special events. The theater is equipped with digital and 35mm reel-to-reel projection! The theater organ plays Friday nights before the first evening show!

Glad to learn THS owns it and has their headquarters in Pittsburgh now.

The number of seats in the Hollywood is currently less than the space available for seats. As of mid-July, they are removing seats and adding new seats, which came from Bowtie Cinemas. Seats removed are to be sent to the Diamond Th. in Ligonier for re-use. I don’t know what the seat total will be after this work is finished.

Have there been any reports of grosses or attendance since the historical society took over? A fund-raising drive is currently being conducted, with details here

On Feb 21, 2020 my friend Josh Silver emailed me as follows (edited down a bit): I happened to come upon the Hollywood Theater on Potomac Avenue close to Liberty Avenue, in a central area of Dormont, which is right next to Pittsburgh.The Hollywood appears to have opened in 1925 and to remain an undivided theater, or at least showing just one movie at a time in the evening, and currently a new release – “Birds of Prey”.

This stretch of Potomac is at least partly viable as an old-time, eclectic neighborhood shopping street, while that appears to have been kept alive by doses of gentrification and immigration from what I have seen of this small South Hills suburb. Next to the Hollywood is Fredo’s (a nice little eatery) and “Beyond Bedtime Books”, which appeared to be a cozy and wonderfully crowded independent bookstore.

Yes, the Hollywood is still a single-screener showing current releases, and operated by the Theatre Historical Society. The seating capacity today is greater than 285 – I think that there are now 400 seats on the main floor and about 200 in the balcony.

According to its website, the Hollywood Theatre is still operating, despite pandemic conditions in other areas of the USA. Wonder if patrons are masking and social distancing? Program schedule here

The Hollywood reopened in late-May and was the only indoor cinema open in the Pittsburgh metro area (A drive-in was also open at that time.) They have been operating for almost 2 months now.