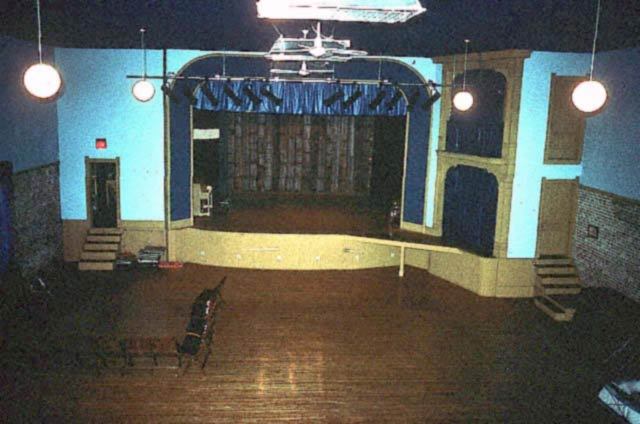 The Opera House was built in the style of most Midwestern opera houses of the day; a multi-story building, with business space available below the upstairs performing arts auditorium. When W. B. Thorpe opened his three story brick opera house on the south side of the court house square in 1889, the community boasted one of the most beautifully designed and best-equipped opera houses in Nebraska. The opening night audience sat on walnut stained hoop-backed chairs and faced double-tiered, velour-draped boxes on both sides of the main stage.

A U-shaped balcony extended from the boxes on each side leading back to a third floor multi-tiered gallery in the rear of the auditorium which increased the seating capacity to 1,000 patrons. The balcony seating was later removed.

Much of the theatrical entertainment, which appeared at the opera house both before and after the turn of the century, arrived in David City via one of the three railroads that served the town.

The Thorpe was used as a dance hall in the 1920’s, a sparring space for a local prize fighter, a basketball court in the 1930’s and 1940’s, a stage for school activities and plays and as a movie house and storage house in the 1950’s…and then sat empty.

Thorpe’s Opera House is listed under David City in the 1897-98 edition of the Julius Cahn Official Theatrical Guide. W.B. Thorpe was Mgr; 950 seats; admission 25 cents and 35 cents. The proscenium opening was 20 feet wide X 18 feet high, the stage was 30 feet deep. The theater was on the second floor, and had electric illumination. There were 6 members of the house orchestra. There were 3 railroads serving the town, but no mention of any hotels. The 1897 population of David City was 2,000.

The building’s entertainment roots date back to its origin as an opera house located on its second floor at opening. Banker William Brownsfield Thorpe’s Opera House is located at 467 D Street was built in 1889 launching December 24, 1889 with an opera by the Andrews Company. That venue was closed and its first floor was the retail home of a long-running Coast to Coast Hardware store. The store vacated and the ground floor space was remodeled as the State Theater launching with Dorothy Lamour in “On Our Merry Way” on October 10, 1948.

The State closed but got one final shot as an entertainment venue when, on October 8, 1965, Adolph Rozanek resumed operations at the State as the Astro Theater with “Hush, Hush, Sweet Charlotte.” He closed the Astro at the end of a 20-year lease in February 11, 1968 with Tony Curtis in “Don’t Make Waves.” It was purchased and remodeled for other purposes though at that time the unused opera house was still on the second floor. The building still is in use on the South Side of the Square as of 2020s and was undergoing renovation.