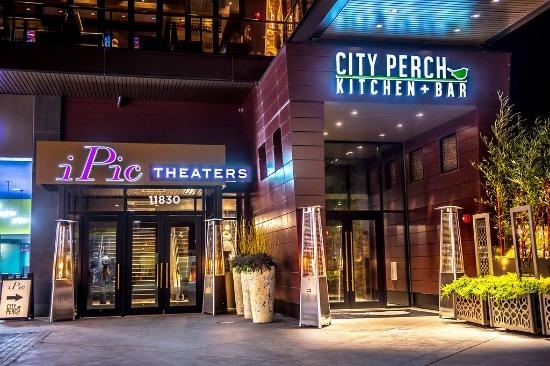 The complex comprised of 47,000-square-feet, the theater includes eight auditoriums of varying sizes and seat numbers from three screens having 112 seats and smaller auditoriums ranging from 82 to 92 seats.

Offering two types of seating: ‘premier’ and ‘premier plus’ both offer differing service of food and drink delivered by servers. Premier Plus seats are made of orange leather and have larger tables, a push-button reclining system, pillows and blankets complete the package. Premier seats are closer to the screen but also have a smaller table for drinks and concessions.

The theaters official opening date is today October 31, but it’s preopening mock run began on Monday 27th with select 2013 movies including ‘Gravity’, ‘The Wolf of Wall Street’, and ‘American Hustle’ (just to name a few)

the DLP systems can playback 4K movies and content.