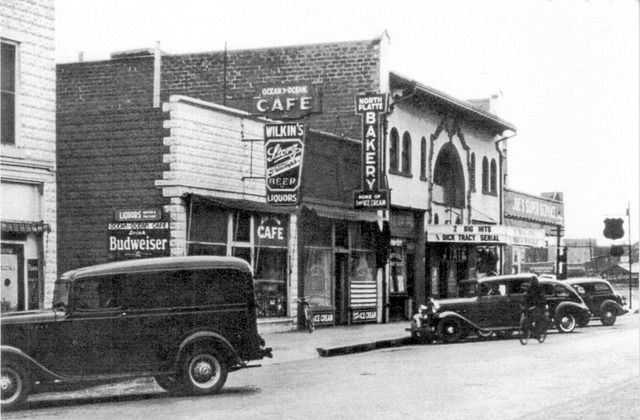 The Platte Theatre was opened on May 3, 1925 with Johnny Hines in “The Early Bird”. On July 3, 1928 it was renamed Alhambra Theatre. It was renamed Luna Theatre on August 15, 1930. It was taken over by Publix and renamed the State Theatre on February 17, 1934. The theatre initially seated 700 but was reduced to 580. The State Theatre was still listed as open in the early-1960’s. It has since been demolished and a Dollar General store is at the site today.

The Platte Theatre launched on the north side on May 3, 1925 with Johnny Hines in “The Early Bird” supported by a two-reel comedy, “The High Flyer” and a Pathé newsreel. On July 3, 1928, the venue under new ownership became the Alhambra Theatre.

Equipped for sound under new owners, the theatre relaunched on August 15, 1930, with Jack Oakie in “Hit the Deck” as the Luna Theatre. Taken over by Publix, the theatre was changed to the State Theatre on February 17, 1934 with Andy Devine in “Horseplay” supported by a Cubby, the Bear, cartoon, and two other short subjects. It closed as the State Theatre.