AMC Village On The Parkway 9 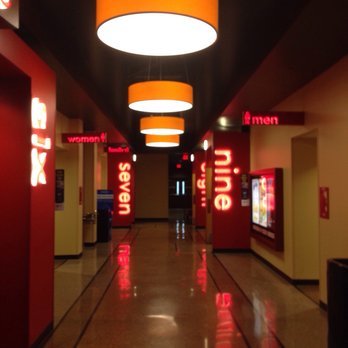 Located in Addison, a far north district of Dallas. The AMC Village On The Parkway opened on October 31, 2014 with automated recliners and reserved seating, available from mobile applications. As with all AMC Theatres, it is equipped with the latest movie theater technology.

The theater offers treats like cheesecake, fries, sandwiches and traditional movie fare. The bar is available before, during or after the show. The Village On The Parkway also offers valet parking, which will bring your car to anywhere you are located.

Located in the former Sakowitz Village was the AMC Village on the Parkway architected by Dallas' firm Good Fulton & Farrell Architects (also known as GFF Architects). Though it was AMC’s 11th location in DFW, it had the distinction of being an original luxury concept theater coined as “The Marketplace” offering a different checkout process for concessions among its amenities. The theater contained a MacGuffins Bar & Lounge as well as the area’s first Prime theater with reverberating recliners. Moreover, the AMC VOTP represented was a throw-back to the days when Prestonwood was the second most popular zone for moviegoing in the Dallas-area back in the 1980s and into the 1990s and a throw-down when AMC battled for clearances against rivals for the exclusive right to show the best films.

True, Prestonwood Mall was long gone and Sakowitz was a distant memory when AMC got involved with the 30-acre, $40 million Village on the Parkway shopping center project. And though General Cinema and United Artists were long removed from the zone, a new kid on the block raised questions about the AMC location. The $20-million Look Cinema had opened in March 2013 in the former UA Prestonwood then Studio Movie Grill location less than a mile from Village on the Parkway. At that time, AMC was outside the territory about three miles away at the ailing Valley View Mall operating its low-cost, first-run 16-screener. No battles or clearance issues with the Look.

But AMC decided to hedge its bets by announcing its AMC Village on the Parkway, a 12-screen then reduced to 9-screen luxury cinema just yards away from the former General Cinema Prestonwood / Montfort theater. To Look, it seemed to be a way of siphoning product away from its screens. And it did almost from the outset, including the 2014 installment of the Hunger Games franchise that was booked at AMC and not Look. More bad news for the Look was when box office sensation American Sniper not only didn’t go to the Look but reaped additional revenue by playing in the more expensive Prime screen at the VOTP. It was the Dallas' area’s second such recent feud when Alamo Drafthouse came to Dallas and Studio Movie Grill moved in just an exit away to a former Loews theater. As of the mid-2010s, it was unclear which of the two high-end luxury theaters would come out on top or if a floated legal battle would take shape between the indy and corporate giant.

Uploaded an September 12th, 2014 trade ad. Trade ad: …less than 1 mile from Look Cinemas. As such, we will not be licensing films day-and-date with this theatre…..

Also checked its listings today. It not showing the mission impossible movie.

dallasmovietheaters, can you upload the grand opening ad for AMC grand 24?

rivest266 i do not know if he has the grand opening ad for AMC Grand 24 and i can see the point why that theatre closed i don’t know maybe AMC Should rebuilt the theatre as an 12 or 14 screen who knows?

Went here in early August 2017. Lots of personality for an AMC. The Prime auditorium is now a Dolby Cinema auditorium – and the BEST ONE I’ve been to!

The zoning war between this place and LOOK is over. They’re both showing the same titles day and date.