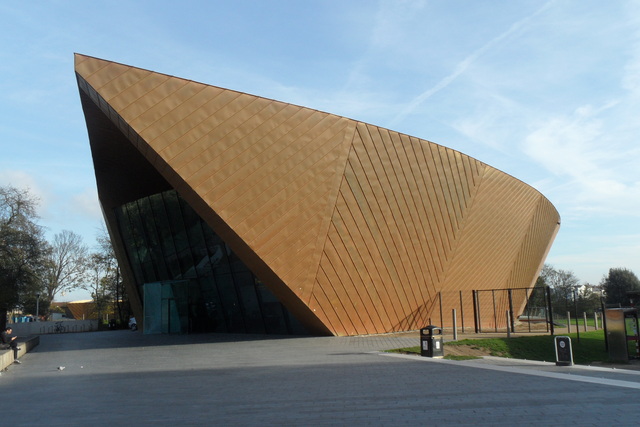 Located in Colchester, Essex, and founded in 1994, the visual arts organisation firstsite’s original home was Colchester’s 18th century Minories building. From this base, an innovative programme of exhibitions and professional development for artists began to grow and flourish. firstsite’s success in reaching out to new audiences for contemporary art drew in tens of thousands of visitors, and by the early-2000’s it had become clear that it had outgrown its home.

In 2003 a capital partnership, that included Arts Council England, Colchester Borough Council, Essex County Council, the East of England Development Agency and the University of Essex, agreed that a new centre for the visual arts should be the lynchpin of a master plan to develop a creative quarter to the east of Colchester’s historic centre.

An ambitious building programme got underway, which would provide a permanent home for firstsite, and form part of Colchester’s future heritage.

firstsite’s new building was designed by Uruguayan architect Rafael Viñoly, his design being selected by a worldwide architectural competition that attracted more than 100 entries.

Located on Lewis Gardens on the High Street, firstsite was built on a steel frame, and clad entirely in TECU Gold – a malleable copper-aluminium alloy that had to be applied by hand by a team of plumbers!

Uniquely, the building lies on Scheduled Ancient Monument land, with archaeological artefacts buried beneath. This meant a ‘no-dig’ policy: conventional foundations could not be dug. Instead, the vast 3,200 square metre building is supported by a giant concrete ‘raft’, which floats above the ground.

The new building opened in 2011. firstsite’s state-of-the-art auditorium seats 190 and boasts a six-metre tab tension screen. Clad with overlapping cherry wood panels, it is used for lectures, presentations and performances, as well as frequent film screenings.