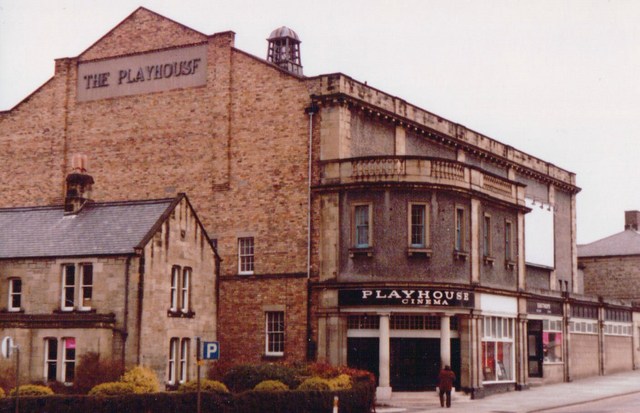 Located in Alnwick, Northumberland. The Playhouse Cinema was opened 21st December 1925 with Milton Sills in “The Sea Hawk”. The cinema had 1,000 seats, a 22 feet wide proscenium, 4 dressing rooms and an 18 feet deep stage. Around 1929 it was equipped with a Western Electric(WE) sound system. It presented films and stage plays. Seating capacity later fell to 700 but the cinema closed on 31st March 1982.

In 1984 it was saved from demolition by the Northumberland Touring Company. Films did not show until after the Corn Exchange closed, and projection equipment and a new screen was provided in 1992. The once derelict circle became a multi purpose arts venue, with films showing about twice a week. It was taken over by the local council and it was closed in Autumn 2018 for a £2.5 million refurbishment. A reopening was planned for summer of 2019, but was delayed and then deferred because of the Covid-19 pandemic. It reopened as the Alnwick Playhouse in September 2021.