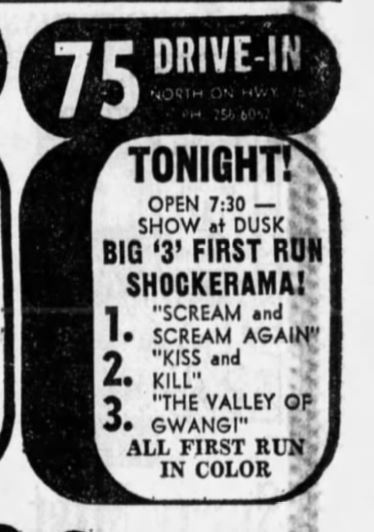 The Drive-In was opened by 1948 when it was operated by H.A. Blank of Tri-States Theatre Corp. of Des Moines. By 1951 it was operated by Affiliated Theaters Inc. of Sioux City, IA. In 1954 it was renamed 75 Drive-In. Car capacity was 750 cars. The drive-in was operated by the Dubinsky Brothers Theatres and was one of two drive-ins they operated in Sioux City. It was still open in 1994, but had closed by the early-2000’s.

Found It. The Drive-In was located on the NE side of town at approximately 2909 US 75 Business (Google). You can still see the outline and entrance/exit to the property. https://goo.gl/maps/zOXGG

Side Note: the Drive In appears in an areal view listed as taken in 1949 on NETR Online. I cannot speak for the accuracy of when the photo was taken, but if true then the drive-in was built before 1954.

I don’t know about the accuracy of the aerial, but the papers on the Dubinsky Brothers list it as opening a year after the Gordon Twin DI which opened in 1953. According to the MPY it didn’t open until 1954. There was also an earlier drive-in called the Capri DI located on Highway 75. Could the aerial your talking about have been the Capri?

You are exactly right Chris1982. I did another search and found a drive-in located SE of the city on HWY 75 that I didn’t see on my previous searches. Probably because I only saw the 75 & the Gordon Twin listed for Sioux City, I never thought their might be a third one along 75 as well (my mistake).

Today, it holds three baseball and one softball fields with little evidence of the old drive-in save for the unusual entrance roadway and the clubhouse apparently being built on where the projector/concession stand once stood.

HOWEVER, while it appears on the 1977 and 1972 Topographical maps, it does NOT appear on the 1965 one. This may have been an oversight, but given the detail of the map about other locations (including the other drive-in on the north side), it also might mean that this drive-in didn’t exist at the time. Further research will be needed to confirm if this one is actually the 75 Drive-In.

AKA Drive-in according to Drive-ins.com.

It’s Still Opened And Operational In 1994 But Closed And Demolished In The Early 2000’s. As Earliest My Best Guess Will Be 2003.

The projection building appears to still exist along with the entrance and exit roads.

According to historic aerials 1949, 1950, 1971 it appears that everything is still there. However in the 1994 Aerial everything but ramps have been demolished. In the 2002 aerial buildings have been built on the sight. In the Google earth view you can still see traces of the ramps.

That’s What I Saw Too Kris.