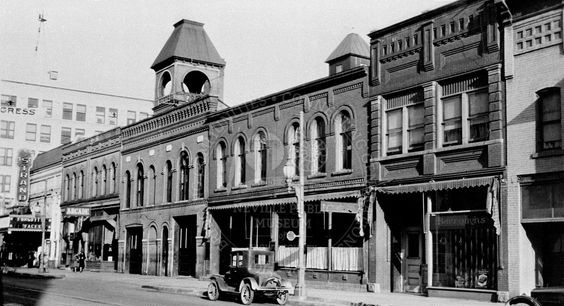 The May 7, 1921, issue of The Moving Picture World ran this article about the Strand Theatre the day it was scheduled to open:

“THE Saxe Amusement Enterprises, of Milwaukee, franchise holder in the Associated First National Pictures, Inc., for the Wisconsin territory, has announced May 7 as the opening date for its new theatre in Green Bay. The date was set on the same day that the contractors who are constructing the new house announced a definite time for the conclusion of their work.

“The new theatre has already been christened the Strand. In architecture and interior finish as well as appointments it is one of the finest in the Middle West. The seating capacity is 1,000 and roomy over-size concert chairs have been selected. The interior color scheme is an original conception with rose, crimson and gold predominating. The aisles will be Wilton carpeted. and the drapes and other furnishings have been specially selected to harmonize with the interior color scheme.

“The stage is twelve feet deep, eighteen high and twenty-four wide. The ventilation provides for 2,500,000 cubic feet of fresh air an hour. Simplex machines are being installed and a screen of the latest type as well as a $10,000 organ.

“It is the intention of the Saxe Amusement Enterprises to conduct the Green Bay theatre on the same lavish scale as it conducts its Strand in Milwaukee. E. J. Weisfeldt, whose arrangements of prologues and general presentation for the Milwaukee Strand, has made Weisfeldt synonymous with the best in picture shows in the Middle West, will perform the same duties for the Green Bay Strand.”

Does anyone know if the Strand had the word Time on the front of it while it was still the Strand? I have a 1946 picture (I know this is correct because of the films showing) that I believe is of the Strand—-but it has the word TIME on the front.

LeslieB, there is a 1953 photo of it as Time Theatre in the Photo gallery. According to the Overview above it was Time Theatre from November 12, 1952 through 1955.