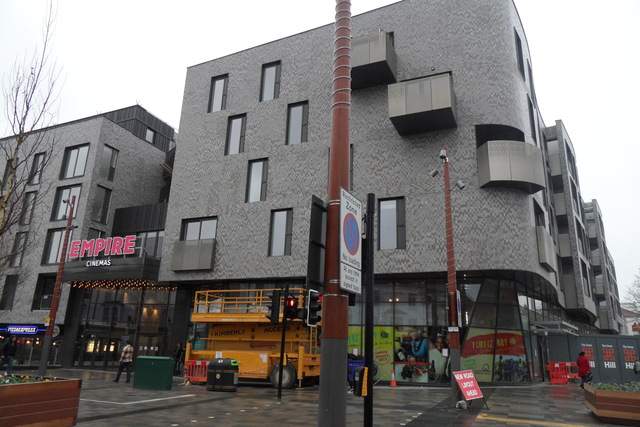 The Empire Cinema was opened on 20th November 2014, and was the first multiplex to be built specifically for the Empire Cinemas chain (their previous cinemas had been takeovers from other chains). Located in the basement of the award winning ‘The Scene’ leisure & housing complex at the Hoe Street end of High Street. It features an IMPACT screen.

It is located adjacent to the currently closed EMD Cinema (ex Granada Theatre) which is a Grade II* Listed building and currently is being renovated in a performance centre.

This brand new multiplex – the first to be constructed by the Empire circuit (which has hitherto been built up from existing cinemas that had to be divested, following circuit takeovers, under competition rules) – is situated in the basement of a high-rise development called The Scene at Cleveland Place, which also provides apartments, retail and restaurant spaces. A small entrance hall leads to steps down to the basement foyer and concession area.

In a nice touch, there are two stand-alone cabinets on the street outside which contain film information posters.

£3.95 tickets for most films on a Tuesday makes this easily one of the least expensive cinemas in the London area as of April 2015.

There was an Empire cinema at ‘Bell Corner’ Wlathamstow.

The Empire Cinema at Bell Corner, Walthamstow is listed on Cinema Treasures on its own page as the Tatler Cinema Club.

I see the (cataloguing) logic, but it’s a shame that most readers will regard this multiples as Walthamstow’s only/original Empire.