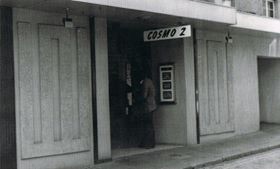 The News Cinema was opened on 5th September 1936. It was a conversion of a former stable building, and had a café and was attached to the Palais Ballroom.

It became the NewCine Continental from 4th April 1955, when it began screening ‘Continental’‘ films, the first of which was Fernandel in “The Sheep Has Five Legs”. In January 1956 it was re-named NewCine News and Shorts Cinema, playing newsreels and short subjects again.

On the 8th May 1959 it became the Curzon Cinema re-opening with “Around the World With Nothing On”. It was taken over on 11th October 1963 by the George Singleton circuit out of Glasgow, and the Curzon Cinema was closed on 2nd November 1963 to be refurbished.

It re-opened on 22nd January 1964 as Cosmo 2 (Cosmo 1 was located in the former King’s, in Glasgow). Cosmo 2 opened with the Italian film “Il Posto”. The Cosmo 2 was closed in August 1977. In the 1980’s the empty building was destroyed by a fire and the remains have been demolished.

I notice that there was also a Newcine in Glasgow. This was an unusual name for a cinema. Does anyone know if there was any connection between them?