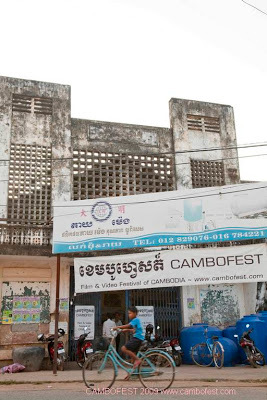 Located off the Central Traffic Circle. The Royal Cinema opened in 1951 and presented a diet of Indian films, Chinese martial arts and westerns. It closed after the Khmer Rouge takeover, but re-opened between 1984-89. It was last used in a semi derelict state for the Cambofest film festival in 2009, using projection equipment loaned by the US embassy. The owning family live in the cinema and although gated at the front entrance, the owners hang a sign advising when guests are welcome through the side entrance. As they speak little English they are helped by Cambo-Eco Tours.

A new roof had to be erected over the decaying original one. The resort once had four cinemas according to Trip Advisor where this cinema is reviewed as The Old Royal. There is also a Cambofest 10 minute film on You Tube.