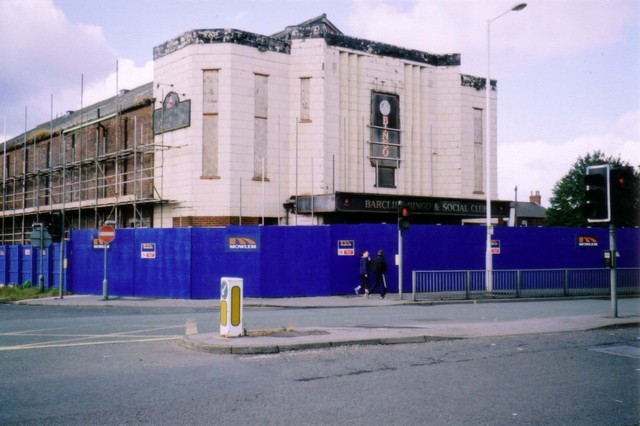 Located in Denton, Lancashire, in the east of Greater Manchester at the corner of Ashton Road and Wilton Street next to the Old Soldier public house. The Barcliff Cinema was opened on 10th November 1939 with Fred MacMurray in “Men With Wings” It was built and operated by Clifford Ogle, and the name was a combination of his daughter ‘Barbara’, and their surname ‘Clifford’. Designed in an Art Deco style, similar to Odeon Theatres being built in the 1930’s, it had a façade covered with cream faience tiles. Seating was provided in stalls and balcony levels and it was equipped with a RCA sound system. There was an aquarium in the foyer. The proscenium was 30 feet wide, and there was a stage, but no fly tower, although variety shows and even pantomimes were staged at the cinema. There were six dressing rooms.

The Barcliff Cinema was closed in 1962. It was sold to Sidney Wild who operated the Savoy Cinema, Romiley, near Stockport, Cheshire. It was converted into a bingo club, but all cinematic equipment was retained in the building, in case it ever went back to cinema use (which never happened).

The Old Soldier pub next door was demolished in 1983 to make was for a slip road for the M67 motorway, and the bingo club closed in 1996. The building became derelict and was demolished in 2002, and the Crown Point North Shopping Park was built on an expanded site.