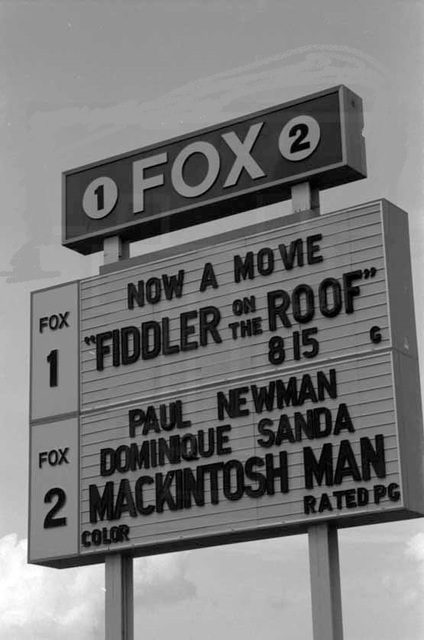 National General Corporation opened the 800-seat single screen Fox Theatre on July 2, 1968. The attraction was a special Kiddie Show of John Wayne’s “McClintock", sponsored by Pepsi Cola. In attendance was Chill Wills, who had made a second career from attending such events. Regular showings began the next day with John Wayne again in “The Green Berets". According to advertisements in the Avalanche Journal, in October of 1969 another auditorium was added.

On August 31, 1973, Lubbock police raided a sold out performance of “Last Tango in Paris” and confiscated the film. The patrons’ money was refunded and it was said that there were already 500 waiting in the rain for the next show.

On December 20, 1974, by dividing the two existing auditoriums, it became the Fox 4 with 1,604-seats. In attendance at the opening was Rhonda Fleming, named by the by the local press as the Vivacious Hollywood Redhead. Ms. Fleming, known in film circles as the ‘Queen of Technicolor’, became Mrs. Ted Mann in 1978.

While operated by Cinemark, the theater closed in 1993.

The March 24, 1968, issue of the Lubbock Avalanche-Journal said that construction on the new Fox Theatre was proceeding rapidly and that the house could open by July 4. The article noted that a Fox Theatre under construction in Amarillo was almost a twin of the Lubbock house. Both were designed by the Los Angeles architectural firm Pearson & Wuesthoff.

Interestingly, shortly before these theaters were designed, L. Perry Pearson and Paul Wuesthoff were briefly involved in a partnership with Drew Eberson. The firm of Eberson, Pearson & Wuesthoff designed or renovated several theaters in Southern California in the mid-1960s.

I uploaded the grand opening ad from 1968. The theatre is the same design as the North Hills Cinerama in Calgary, AB. Also the same ad ran in Calgary.

I remember seeing this theatre closed in the early 90’s and recall that it was more in tune with the design of the Fox Amarillo and the Buena Vista Tuscon.

Scott: Your photo of this house at CinemaTour shows the building quite changed from the drawing in the grand opening ad Mike uploaded. The exterior was obviously remodeled at some point and its clean, Midcentury look was replaced by a portico with some of those rather retarditaire precast concrete columns with brackets that marred a lot of late (and decadent, to my eye) modern design.

The Buena Vista Tuscon, which was not designed by Pearson & Wuesthoff but by Charles “Bud” Magee, had that clumsy late modern look from the beginning (follow the links in this comment by rivest266), and the Tucson house must have been taken as the model for the later remodeling at the Lubbock and Amarillo houses.

Late in his career Bill Pereira adopted similar precast concrete elements for many of his designs, including the Los Angeles County Museum of Art, and Charles Magee worked in Pereira’s office for a while during that period, which may be where he picked up the style. I’ve always found it clunky and awkward, and I was terribly disappointed when Pereira, who in 1938 had shown his mastery of early modernism in designing the splendid Esquire Theatre in Chicago, began using a style so fussy and graceless.

Usually I hate to see theaters demolished, but I’d say that the people of Lubbock are fortunate that they don’t have to encounter this eyesore anymore- though naturally it would have been better if somebody had just stripped off the extraneous junk and restored Pearson & Wuesthoff’s original design.

The site of the Fox 4 is now under the overpass which carries traffic from westbound 19th street to the southbound lanes of the Marsha Sharp Freeway. The ramp overpass was still under construction when some of the current Google street view shots were taken, so it’s pretty recent. Historic Aerials has views from 2012, 2004, and 1995. The theater and an adjacent motel closer to Quaker Avenue were both still standing in the 1995 view, but they are gone in the 2004 view.

Historic Aerials has changed its format for links and only provides for linking to Twitter now, so I don’t know if this link will work or not, but lets try it.