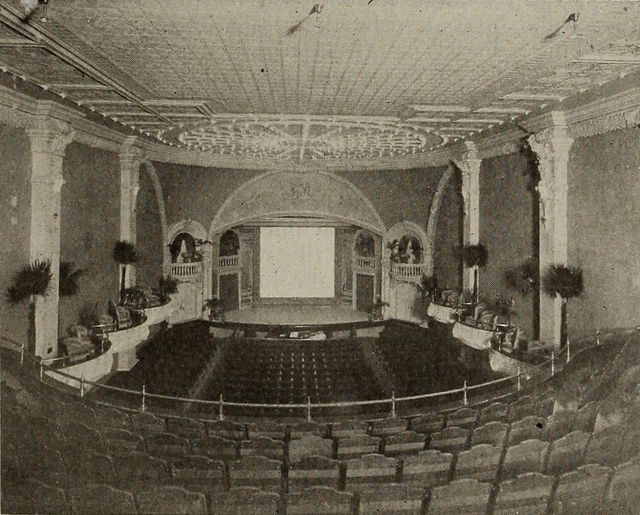 The Bijou Theater was the smallest of the downtown first run theaters. The area presenter for Columbia Pictures, this old palace was built on lower Worthington Street. The original 1920’s style front still existed until the very end. At some point, part of an adjacant building was used for a new modern lobby and entrance.

The Bijou Thetaer was the only Springfield theater without a marquee. There was an overhang with only the theater’s name. The auditorium was plain but well maintained. The screen was very large in proportion to the theater size which made for great viewing.

In 1953, it gained the ire of the Catholic Diocese of Springfield because it ran a movie called “The Moon Is Blue”, which evidentally briefly showed a female breast. It was “suggested” that parishoners take a pledge at Sunday masses not to attend the Bijou Theater during this performance.

The Bijou Theatre was located at 91 Worthington Street and this theatre was listed as having as many as 1015 seats in the 50’s.

The Bijou opened on Feb. 19, 1910 as a playhouse. It’s exteriors/interiors were designed in the then popular Moorish decor.
As Mr.Larkin states, it never had a full marquee, only it’s name on the sides of an overhang that was above a glass enclosed ticket window. One had to walk down from Main St to it’s entrance to scan the movie poster windows to see what was playing.
The Bijou had a balcony and loge box seats on either side of the stage and screen. In the late ‘60’s it was called the Bijou Cinema during it’s porno years. In 1973, new owners returned it to it’s real name, showing family fare films in an attempt to save it. The attempt failed and it closed in 1974. In Sept,1975, it was razed.
The Bijou was the last of Springfield’s downtown movie theaters to be torn down.

When Springfield native Ted “Dr. Seuss” Geisel was growing up, he used to skip class and catch the matinee at the Bijou. He was reprimanded by his mother who told him that boys that go to the movies would never amount to anything. The truant officers headed first to the theatres to catch hookey players.

I worked as an usher at the Bijou in 1951 when I was 15 years old. The manager at that time was Ed. Harrison. The theatre was water cooled and the system did not work well when crowded. I remember during 1951 when “Born Yesterday” was playing. It was very popular and ran for six weeks. During 1951 actresses Barbara Hale and Bee Williams made a person appearance at the Bijou promoting a picture that they were starring in. I still have the autographed pictures I received from them.
Charlie W

The Bijou is listed in the 1927 Film Daily Yearbook as having 900 seats and open daily.

When this theater opened on Feb. 19, 1910 it was called the New Bijou because it was a replacement for the original Bijou which had opened on March 23, 1907, with 250 seats. I don’t know what street the first Bijou was located on, or what happened to it. The New Bijou (on Worthington St.) was purpose-built for movies only, although it had a stage. The exits from the front of the auditorium went past the sides of the stage and out the rear, emptying towards Phelps Avenue. The theater had about 1,000 seats on the main floor plus about 300 in the balcony and 6 boxes. There was a “fireproof” projection booth. This info is from an article published in the July 15, 1910 issue of a trade magazine called “The Nickleodeon” which a friend sent me. The article contains a floor plan, plus the 3 photos which someone has posted above. This trade paper is among the show business trade papers which are now available on line.