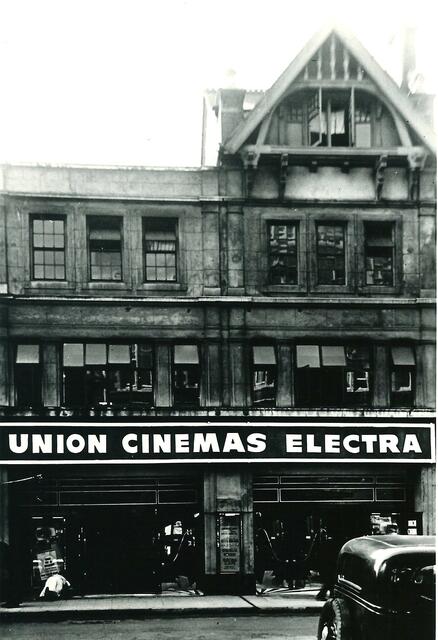 The Electra Palace was opened on 25th March 1911. It had a seating capacity for 500 in its oddly L-shaped auditorium, which had a wider section at the screen end. In 1919 it was enlarged by another 118 seats and a new projection box was built at the rear of the auditorium. Around 1920 a small circle seating area was added to the auditorium. It was equipped with a Western Electric(WE) sound system in February 1931, and the cinema was taken over by the Union Cinemas chain. The seating capacity had been increased to 1,200.

In October 1937 Union Cinemas were taken over by the Associated British Cinemas(ABC) chain. They closed the Electra Cinema on 23rd August 1958 with Errol Flynn in “Too Much, Too Soon” and Clint Walker in “Fort Dobbs”. The auditorium was divided horizontally and was converted into a Co-Operative store, retaining the barrel-vaulted ceiling on the upper level. The Co-Operative store was eventually closed, and the building was demolished in 1978 and a Marks & Spencer store was built on the site.