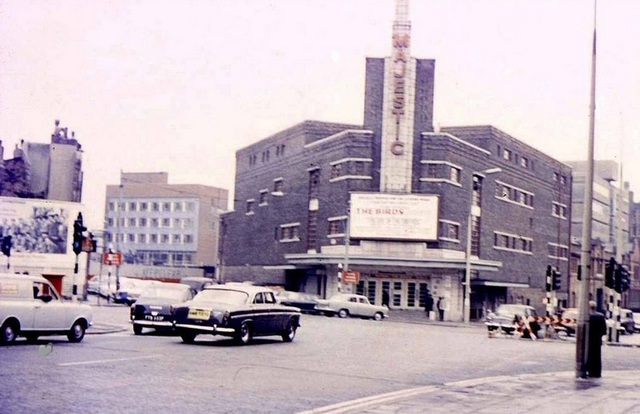 Located in the east of the inner city centre at the corner of Daulby Street and Prescott Street. The Majestic Cinema was built on the site of the Majestic Picture House of 1914, which was closed on 3rd April 1937 and was immediately demolished (it has its own page on Cinema Treasures).

The Majestic Cinema was opened on 2nd October 1937 with Bing Crosby in “Waikiki Wedding” and Karen Morley in “The Girl From Scotland Yard”. The magnificent corner entrance was dominated by a slender fin 75 feet high tower feature, which had the Majestic named vertically placed. Inside the auditorium seating was provided for 1,162 in the stalls and 632 in the circle. It was equipped with a Western Electric(WE) sound system. The Majestic Cinema was independently operated.

It was equipped with CinemaScope in October 1954, with Guy Madison in “The Command” being the first film to be shown here in that process. The Majestic Cinema was closed on 27th June 1970 with Alfred Hitchcock’s “The Birds” and Howard Keel in “The Day of the Triffids”. Due to its sturdy construction, demolition of the building proved to be a difficult task. The site is now part of the grounds of The Royal Liverpool University Hospital.