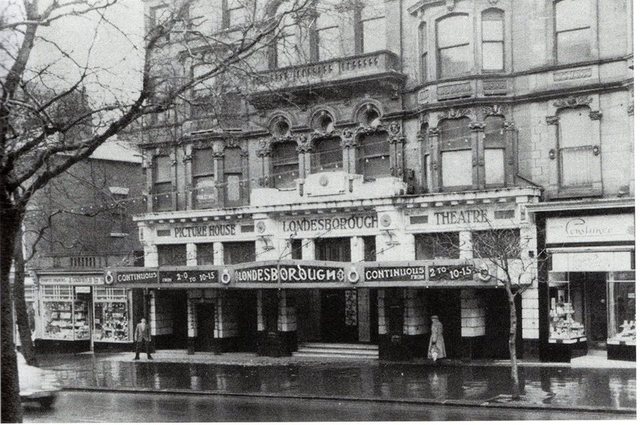 The Londesborough Rooms was opened in 1871 as a multi-function hall. It was remodelled less than a year later and re-opened as the Londesborough Theatre, with seating provided for 1,000. Operated by Waddington & Sons, it was screening films as part of the programme in the early-1900’s. It was issued with a Cinematograph Licence in 1910, and was closed after the end of the summer season of 1913 to be enlarged to 2,000 seats to the plans of Leeds based architect James Robertson Watson. It re-opened 11th July 1914 with a film performance, but immediately went back to live theatre use. It became a full-time cinema in 1925.

In late-1929 the Londesborough Theatre was equipped with a Western Electric(WE) sound system. It was closed as a cinema on 19th September 1959. The building was left unused and was demolished in the summer of 1960.

Opened as the Londesborough Rooms on the 14th November 1871, a multi-purpose ballroom, concert hall and meeting room, with a flat stalls floor and two balconies with side balconies entending to the raised platform stage and possibly a third flat fronted balcony at the rear.

It was designed by Messrs Stewart & Bury of Scarborough for Mr Waddington, a pianoforte manufacturer who owned an adjacent shop. After only six months extensive alterations took place to remove the platform and build a conventional stage, and to rake the stalls seating. It reopened 13th July 1872 as the Londesborough Theatre.

It was again rebuilt internally in the winter of 1913/14 when Mr Watson of Leeds designed a completely new theatre – only the outer walls survived. This included a projection box and the theatre opened with a film on 11th July 1914, but reverted to stage shows immediately after with a variety show headed by George Formby. In 1925 the last recorded stage performance took place – the musical “The Geisha Girl”, and films took over completely until closure on the 19th September 1959.

By now much of the building was disused – the stage still containing act-drops, the upper levels and bars closed off, and the caverous basement (once advertised as one of only two artificial ice-rinks in Europe) derelict. It had been sold for £27,000 in August 1959 and demolition commenced 3rd June 1960, completed by the end of August.

It was, for much of its later life owned by Londesborough and Capitol Cinemas (Scarborough) Ltd, and run in tandem with the nearly opposite Capitol Cinema. Interior photographs and plans have been frustratingly impossible to locate.