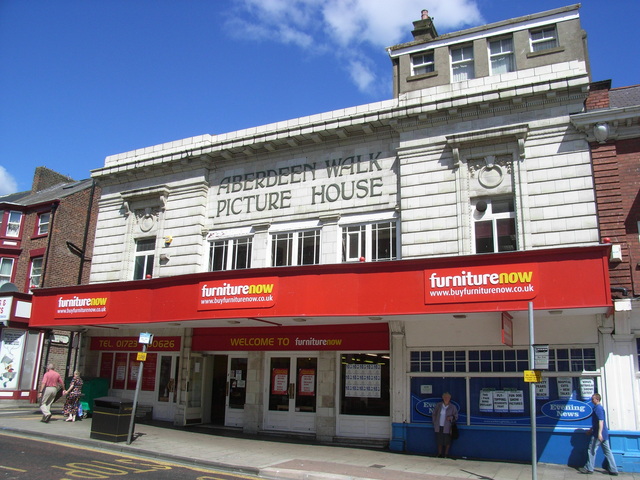 Designed to the plans of architect Frank A. Tugwell, the Aberdeen Walk Picture House opened on 10th September 1920. Seating was provided for 915. It had a 26 feet wide proscenium, the stage was 12 feet deep and there was one dressing room. The cinema also boasted a café attached. In late-1929 it was equipped with a British Acoustic(BA) sound system.

By 1944 it had been re-named Aberdeen Cinema and had been equipped with a British Talking Pictures(BTP) sound system and a second dressing room had been added. The seating capacity had been reduced to 884. The café was in use as a dance hall.

Later equipped with an RCA sound system, it was re-named Gaiety Cinema around 1957. CinemaScope had been installed and the screen was 28 feet wide (possibly positioned forward of the original 26 feet wide proscenium). Live shows were presented during the summer months. In the early-1960’s it was presenting summer live shows and was in use as a bingo club for the remainder of the year. It became a Walker’s Bingo Club and by 1994 it was operating as Corrigan’s Bingo Club. It has now been gutted internally and converted into a charity shop for the British Heart Foundation.

The Aberdeen Walk Picture House was designed by Frank Tugwell and opened on Saturday 10th September 1920. It was a unique design in that the company had intended to buy a plot of land to the right of the cinema and the design incorporated this increased width. In the event the land was not available and the design was adapted to a lopsided interior as if one third of the width had been lopped-off.

It was equipped with a small stage which was often pressed into use in the Summer season, and by 1960 it was announced that it would become a permanent live theatre under the Gaiety name, although this was short lived as by 1963 it was a bingo hall.

Towards the end of the first decade of the 21st Century the hall was gutted at ground floor level and a modern shop interior inserted as a short-lived department store in the style of Woolworths, later it was taken over by the British Heart Foundation as a furniture outlet.

Managing Director at one time was Pentland Hick who bought the Central Cinema, Pickering, from Jack Prendergast in 1960.