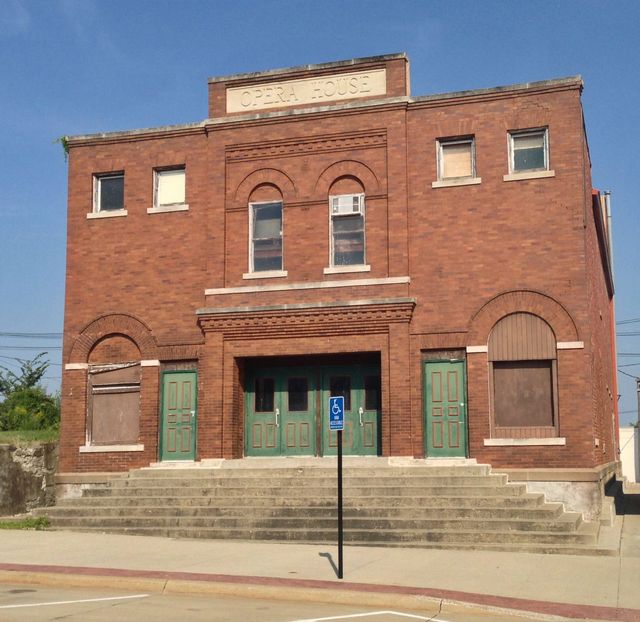 The Brooklyn Opera House was incorporated in 1910 and opened on February 28, 1911 with the “Toymaker’s Dream”. The Opera House was the center of cultural activities with various performances and silent movies held during the early years. Over past several years restoration of the building had been a project for several volunteer groups. Currently (2015), the Opera House is under private ownership.

A classic gothic brick and handsome building with a rich history. Glad it is being restored and not torn down.

The caption of this photo says the Opera House was also known as the Broadway Theatre. The Flickr user photolibrarian is a retired university librarian who lives in Nevada, Iowa, so he’s likely to be a reliable source, though I’ve found no other references to an aka of Broadway Theatre for this house. I did find a Broadway Theatre in Brooklyn, Iowa, mentioned in a couple of trade journal items from the 1920s, and in a newspaper article from 1945, but without any details which would definitely connect it to the Opera House.

Not sure why it would be called the Broadway Theatre. Broadway is two streets over. The Broadway fluctuated in its seat count. It was listed with 300 seats in 1930 in the mid-1030.s 350 seats. and by the mid-1940’s 450 seats. That seat count lasted into the 1950’s when the the theatre was still in operation.

seating was listed at 350

There is a Broadway Street in Brooklyn, but Google’s satellite and street views show that it is entirely residential, so it seems unlikely that it would have been the location of a theater. Brooklyn is a very small town, so a second theater also seems unlikely, but if Brooklyn did have a second theater I’d expect it to have been on either Jackson Street or Front Street, where most of the town’s other business are.

Opera Houses of Iowa by George D. Glenn & Richard L. Poole, Iowa State University Press, 1993 is the source of my information with much more detail on this theatre. Book states that local library has photos and history.

Thanks for the source, Hank. If a scholarly book published by the Iowa State University Press says that Broadway Theatre was an aka for the Brooklyn Opera House (which it does, on page 89 in a Google Books snippet view,) that’s good enough for me.

The Brooklyn Opera House is open, at least intermittently. Here is the official web site, although it is not updated as frequently as their Facebook page. Upcoming events include a production of “The Odd Couple” and the last two entries in their summer movie series, for which there is no admission charge.