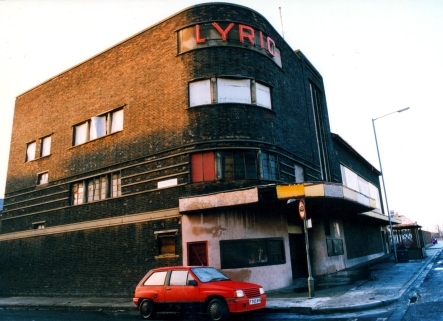 Located on Pochin Road in Grangetown (aka Grangetown-on-Tees), to the east of Middlesbrough, Cleveland. The Paragon Picture Hall opened prior to 1932, when it was operated by Grangetown Paragon Pictures Co. Ltd. It was equipped with a Marshall sound system. The proscenium was 30 feet wide, the stage 12 feet deep, and there were two dressing rooms.

By 1937 it had been re-named Lyric Cinema and was listed as part of the E.J. Hinge Circuit, and the address had moved to nearby Bolckow Road, and continued at that address for the remainder of its life. By 1944, it was back und the ownership of Grangetown Paragon Pictures Co. Ltd. and they operated the Lyric Cinema until it closed. They installed a British Talking Pictures(BTP) sound system. By 1947 it was also presenting occasional variety shows on its stage.

Upon closure as a cinema, it re-opened as the Lyric Bingo & Social Club.