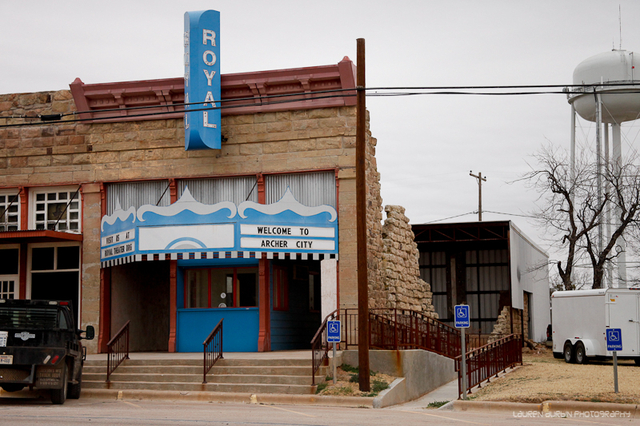 The Royal Theatre was opened by 1933. This great place is familiar to anyone who has seen “The Last Picture Show” or its sequel, “Texasville”. It is located on the town square in Archer City.

When I visited in spring of 1992, the Royal Theater and indeed the entire town looked just as it did when the movie was filmed in 1971, and probably as it did in 1952 when the movie was set. The theater burned in 1965 but the production dressed up the front to make it look like an operating theater. The lobby and auditorium were burned out and were too small for filming anyway, so the interiors were shot in the Westex Theatre in Olney, Texas, a few miles to the south of Archer City.

Amazingly enough, in 1992 the ruin of the theater was accessible for exploration to anyone who wanted to brave the rattlesnakes or the burned out stairs to the balcony.

The detailed website for the theater gives an account of how the it was restored starting in 1996 and its re-opening in August of 2000. I have read that the burned out theater was leveled and is now a vacant lot next to the restored theater which is really in the space of the ajoining storefront. I don’t know about this. When I visited in 1992 there was already a vacant lot next to the ruin and the picture on the website looks like the same spot to me.

At any rate, it occupies the north end of the strip of stores that lines the west side of the square. If you are ever in north central Texas, this place is a must for fans of “The Last Picture Show” or old theaters in general.

Wow. One has to wonder why such an exlaborate handicap access ramp, would have been built right next to what appears as the unsafe remains of the Royal Theater’s wall.

Yeah I guess so. You’d think the excavation to pour the ramp-concrete alone, would have undermined a freestanding wall in that condition. Maybe it has specific bracing behind it. But why is the wall even left in that manner? Does keeping the building hollowed out that way have some historic significance?
There’s no visible sidewalk to the right of the ramp anyway. Why such grandiose access to an empty structure? Strange. Must have been some egress code or something.

Ha! Very good. I will admit, it does look cool.
I’d have filled the front windows with multiple stills from “The Last Picture Show”. So visitors could do their own comparisons on the property.
Wonder if that old Texaco is still down the street. Have to go out West again someday.

An April 2006 Photo I took of the Royal Theatre in Archer Texas..

Theater made famous in The Last Picture Show' to reopen ARCHER CITY, TEXAS (AP) — In this one-stoplight town immortalized in a 1971 Academy Award-winning film, a national icon is returning to the limelight thirty-five years after the Royal Theater burned down, the front of the stone building – complete with a blue and white marquee, orange awnings and illuminated “Royal” sign – has been rebuilt to appear as it did in “The Last Picture Show,” based on a novel by Archer City native Larry McMurtry. The site of the original 100-seat theater won’t show movies but will be an open-air amphitheater with a larger room next door for bands, plays, dinner theater and art classes. “This,” said project coordinator Abby Abernathy, “would have been simple to rebuild as a movie theater, but for what? To get 100 people in here?” The renovated theater will be unveiled Thursday night, the 35th anniversary of the fire. A fifth-generation resident, Abernathy, 38, bought the property in 1986. When his idea for a restaurant failed to get support, he convinced community leaders to restore the theater as a tourist attraction. The city was beginning to dry up, and we had to re-engineer,“ he said. "Tourism is what we had to offer, because the pilgrimage to the theater was everlasting. People kept coming here for that.” Filmed in black-and-white and hailed as a masterpiece, “The Last Picture Show” portrayed the breakdown of an unhappy fictional one-horse Texas town in the 1950s. Abernathy initially received little support from locals, many of whom objected to the R-rated movie’s sexual material and felt it denigrated their town. But after working on the restoration for several years, Abernathy has apparently convinced many that their link to the past is key to the town’s future. “Now, even the biggest skeptics think it’s a good idea,” Abernathy said. The theater actually burned before the movie was made. Still, hundreds of people each year have made the trek to find the Royal and snap pictures of the rubble. McMurtry, who won a Pulitzer Prize for “Lonesome Dove,” and others in town are not surprised by lingering interest in the landmark thanks to the film, which was nominated for eight Oscars. “The Last Picture Show” had a lasting impression because it’s representative of small-town America,“ he said. "People with small-town backgrounds can relate to it.” The Archer City of today is much like it was portrayed in the film, which was directed by Peter Bogdanovich and starred Cybill Shepherd, Jeff Bridges and Timothy Bottoms. Ben Johnson and Cloris Leachman both won supporting actor Oscars. Nearly 1,800 people live in this oil and ranching town in northcentral Texas, about 25 miles south of Wichita Falls. The only traffic signal is a flashing light. The town has a few stores, banks, gas stations and one fast-food chain restaurant, Dairy Queen. “I guess you could say not much has changed here since the 1950s,” said Mazie Berend, who owns The General Store in the downtown square. Berend remembers going to the theater as a child in the 1950s, when a movie cost 20 cents and popcorn cost a dime. She and her friends watched John Wayne and Elvis Presley films, often turning around to see who was necking in the balcony. “Everybody went to the Royal because that’s all there was to do,” Berend said. But that stopped when theater caught fire one night in August 1965. What was left was a charred facade and pile of stones and rubble. “People were upset because it was their childhood memories going up in smoke,” Berend said. The owners could not afford to rebuild, so the structure remained in ruins for decades. Abernathy decided to donate the theater to the nonprofit Archer City Community Foundation, so grant money could be obtained. The foundation then bought the space next door to expand the theater. For the past four years Abernathy has done most of the physical rebuilding himself. The final cost will be about $400,000 and profits from the renovated theater will go back into operating it. “It’s just a dream come true for this town,” said Karla Powell, who owns a jewelry store and floral shop downtown. “Small towns, if they don’t have something to bring people in, then we’re all over.”

A ‘Royal’ Rebirth
by Kristen Tribe

Laughter ripples through the crowd at the Royal Theater in Archer City, Texas (pop. 1,848), as singer Rodney Hayden tells a witty tale. But as he begins strumming his guitar, the laughter subsides, Hayden begins to sing and the audience absorbs every note. “Singer-songwriters love nothing more than you listening to what they have to say,” says Tesha Thomas, producer of the Lite Week Lazy Boy Supper Club at the Royal, a recurring showcase for performers to sing their songs and tell their stories. The Royal Theater has a long tradition of inspiring storytelling, first as a movie house, then as the basis of a famous novel and film, now as host to the supper club, theatrical productions and the Texasville Opry, which presents six performances each year. Pulitzer Prize-winning author Larry McMurtry, 71, grew up in Archer City and well remembers going to the Royal as a child. “Most of the movies I saw were at the Royal,” he recalls. “We had to drive in from the ranch. It was the only culture there was, so to speak.” In 1965, the town’s shred of culture was lost when the theater burned; although a cause was never determined, locals always believed it was because someone was smoking in the balcony. Despite its destruction, the Royal became a risen “star” when McMurtry spotlighted it in his novel “The Last Picture Show” the following year. It was memorialized again in the award-winning 1971 movie based on McMurtry’s book and filmed partially on location in Archer City. In 1986, McMurtry opened Booked Up in Archer City, a bookstore comprising four buildings and hundreds of thousands of books. The store proved to be a haven for book dealers, readers, movie buffs and autograph seekers in search of the author. But despite the literary and cinematic attention brought to the town, the Royal continued to lay in ruins until a local theatrical group, the Picture Show Players, decided to rebuild it as a multiuse performing arts center. “A group of people wanted to perform and wanted to see it rebuilt and have an economic impact,” says Archer County Judge Gary Beesinger, 54, producer of the Texasville Opry and himself a member of Picture Show Players. “It was an ‘If we build it, they will come’ mentality.” On August 24th, 2000, the 35th anniversary of the day it burned, the Royal Theater reopened. Since its rebirth, the Royal has regularly hosted a variety of theatrical and musical productions and various other events. Another Archer City native, actress Angela Kinsey, who plays Angela Martin on NBC’s hit series The Office, held her rehearsal dinner and wedding reception at the Royal in 2001. Although the dinner was planned for the theater, the reception was to be outdoors until a violent storm necessitated an emergency move inside. “The winds picked up and everything went nutty,” says Kinsey, who lives in Los Angeles but regularly visits family in Archer City. “People were running for cover and salad was flying through the air.” Despite the storm, her wedding is just one of many fond memories Kinsey has of Archer City. She and a friend often did their high school homework at Booked Up, and she remembers always being curious about the ruins of the Royal Theater and excited to hear about its restoration. “It’s important for every community to have a creative outlet,” Kinsey says. Today, the Royal Theater’s bright blue ticket booth serves as a beacon to storytellers of all sorts, and to those who want to hear their tales. McMurtty, who splits his time between homes in Archer City and Tucson, Ariz., says the Royal is once again a place of cultural significance in an area where ranching and oil comprise much of the economic base. “It’s always good,” he says, “to have a little something to bring the stimulation of art into a small town.”

The theatre interior shots for the Last Picture Show were done at the West Tex in neighboring Olney. That theatre was demolished in the mid 80s.