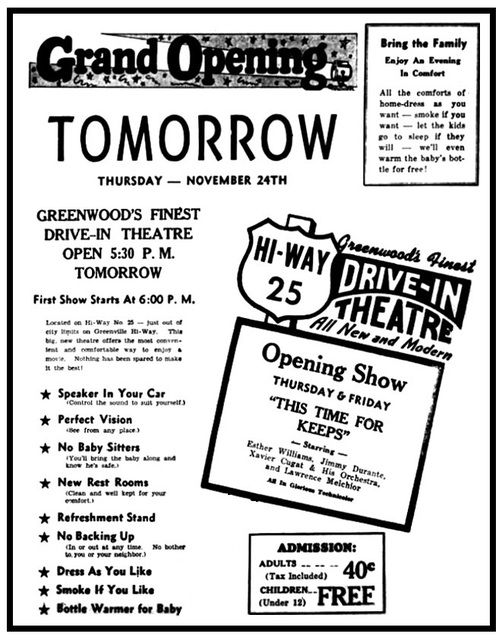 The second drive-in theatre to open in Greenwood, South Carolina was the Hi-Way 25 Drive-In. It opened on November 25, 1949, screening the 1947 musical “This Time for Keeps” with Esther Williams, Jimmy Durante and Lauritz Melchior. The Hi-Way 25 Drive-In was opened by Marion & Virginia Ackerman and William A. Gray (Marion’s father in-law). It was built at a cost $50,000 and featured a capacity of 375 cars along with in-a-car speakers. Marion and Virginia had two sons named Gray and Steve, with one daughter named Joan, all three grew up working at the drive-in. Back in 1993 Gray commented that “It was a family owned business, so everybody worked. From the time we were 10 years old, we were running the popcorn up and down the ramps delivering to cars. That was back in the good old days of 10 cent Coca-Cola’s, 15 cent popcorn". A routine day for Marion would begin at 8:30 a.m. every day, when he would actually watch the movies to be screened that night, checking for glitches in the film and bad splices. Later in the afternoon Marion would go home to rest for a while, returning for the nightly showings.

Gray also commented that it was his job during the summers to repaint the speaker’s and posts. Working in the family business allowed them to save their money and help to put them through college. Gray and Steve would become dentists and open up their own dental practice together. Before the 1955 movie season started, the screen tower was enlarged for screening CinemaScope movies. In the late-1950’s and early-1960’s, Marion along with Pete Zouras, who was operating the Auto Theatre at that time, were fighting to change the interpretation of the South Carolina blue laws about screening movies on Sunday. During that time period a lot of drive-in operators and owners were arrested for screening movies on Sunday per the blue law. Their logic was that a law passed in 1712 does not apply to something that was not invented until the 20th century.

On September 9, 1972, the drive-in was renamed to the North 25 Drive-In. In August of 1973, Marion Ackerman passed away. Virginia Ackerman continued operating the drive-in until September 21, 1974, and it was closed never to reopen again. The Ackerman family ran it for 25 years and it was time to close it. The North 25 Drive-In was demolished in late-September of 1974 and the property was sold. There is a Kmart store and McDonald’s on it now.