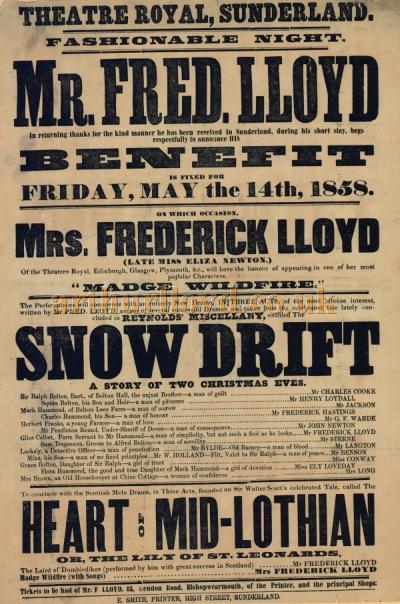 Located in Sunderland, Tyne and Wear. The Royal Theatre was opened by Roxby & Beverley in December 1855 and was designed by architect G.A. Middlemiss. It had several operators and in 188 alterations were carried out to the plans of architectural firm Thomas Moore & Son. In 1889 it was taken over by Richard Thornton and from 1906 was screening films as part of the variety programme. The Royal Theatre was closed in 1933 due to recession, and it became a boxing stadium.

It was taken over by George Black and the interior was remodelled to the plans of architect Edwin M. Lawson and re-opened as a cinema known as Black’s Theatre Royal on 11th November 1940. The first films were Charles Laughton in “Ruggles of Red Gap” and “ Cary Grant in "Bluebeard’s Eight Wife”. During World War II concerts were held on Sunday’s.

It was taken over by the Rank Organisation on 5th October 1959 and the Theatre Royal closed as a cinema on 19th September 1964 with Kenneth More in “Sink the Bismark”. It was converted into a Top Rank Bingo Club which closed in 1983 when the towns' Odeon was converted into a bingo club.

The Theatre Royal became the Blue Monkey nightclub which was closed in 1994 due to an arson fire. The empty building was demolished in 1997. A petrol station was built on the site. This has been demolished and part of the site has been redeveloped to build a new leisure centre, which contains a Cineworld multiplex that opened 27th November 2004, which is now the Empire Cinema.