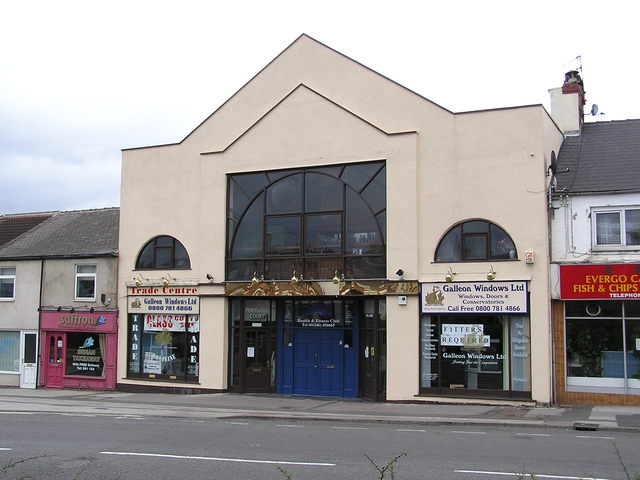 Located in the Whittington Moor district to the north of Chesterfield, Derbyshire. The Lyceum Theatre was opened on 22nd December 1913. It had a billard hall attached. It had a programme of variety acts and films. By 1922 it was operating as a full time cinema.

The Lyceum Theatre was closed in June 1932 and the façade and interior underwent a modernisation to the plans of architects Wilcockson & Cutts. Also it was equipped with a British Thomson Houston(BTH) sound system. The auditorium now had painted panels depicting scenes of Venice, Italy. The billiard hall was also renovated.

The Lyceum Cinema re-opened 3rd August 1932 with Wallace Beery in “The Big House” and Lon Chaney in “The Unholy Three”. The cinema survived through World War II but was gutted by a fire on 27th June 1946. Due to post war building restrictions and rationing, there was a delay in it reconstruction.

In 1948 architect J. Brian Cutts designed a new interior and it re-opened with 540 seats on 25th July 1949 with George Brent in “Luxury Liner”. In early 1960, the adjoining building the Carlton Cabaret Club was converted into a bingo club, and on 11th July 1963 the Lyceum Cinema showed its final films and the bingo club moved into the building. The bingo club was closed in the 1980’s. The empty building was gutted in 1991 and converted into offices. Today (2015) the building is in use by the Galleon Windows Company and a fitness centre.

A kitchen and bathroom centre by July 2018.