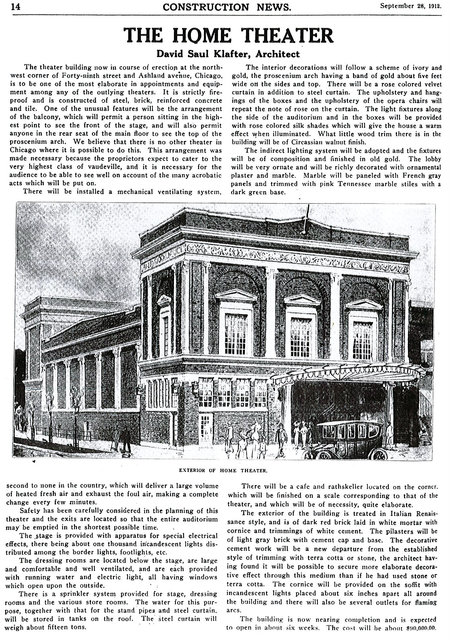 One of five Ashland Theatre’s to operate in Chicago. This one in the New City neighbourhood was due to open in October 1912 as the Home Theatre, but there were delays, and it eventually opened in 1914 as the Ashland Theatre. It was closed in 1923.

According to a January 4, 1914 article in the Chicago Tribune, The Ashland was nearing completion. Earlier articles documented controversy regarding building code violations. The Ashland Theater occupied a 50 x 125â€™ lot, had a seating capacity of 800. It cost about $75,000 to build. D. S Klafter was the architect. A feature of its balcony, which was claimed to not be found in any other theater in Chicago, is that a person sitting in the highest point in the highest point at the rear can see the front of the stage and one sitting in the rear on the main floor can see the top of the proscenium arch.
There is other information about and a 1914 photograph of this theater in the Chicago Tribune Archives database.

The list of theaters in the 1921 edition of the Chicago Daily News Almanac has two houses called the Ashland Theatre. This house on Madison Street was in operation by 1916, when it was mentioned in the July 8 issue of Motography. The house that is described in the January 4, 1914, article from the Chicago Tribune quoted in the earlier comment by AgelessTreasures was the other Ashland Theatre, located at 4856 S. Ashland Avenue.

It was the Ashland Avenue house that was designed by architect David Saul Klafter (though he designed many theaters during that period and I don’t know for sure that he didn’t design the Madison Street house as well, but I’ve found no period source saying that he did.)

The Ashland Avenue house did suffer construction delays for more than a year. It was under construction in 1912, when it was the subject of an article on page 14 of the September 28 issue of Construction News (Google Books scan.) It was originally to have been called the Home Theatre, but apparently changed owners during the delays and was renamed before finally opening.

The Estey organ installed in the Ashland Theatre in 1924 was probably in the Madison Street house. The Ashland Avenue house is listed in the moving picture supplement of the 1921 Cahn guide as the New Ashland Theatre (though it might have actually been older than the Madison Street house) with the note OB, meaning out of business. I’ve been unable to discover if it ever reopened after 1921. If it did, it might have been under another name.

The building, however, is still standing at the northwest corner of Ashland Avenue and 49th Street, and from the 49th Street side is easily recognizable as a former theater, though the facade is much plainer than that shown in the illustration that accompanies the 1912 Construction News article.

The Bing birdseye map still shows the old facade of the Ashland Joe Vogel refers to, which bears little resemblance to the one shown in the 1912 article, though the floorplan is the same. Perhaps it was delayed by costs.

It also appears on the 1925 Sanborn map, so it may have reopened.

The Ashland Avenue house also shows up on the theater list in the 1925 Daily News yearbook, so it probably did reopen. I have no idea how long it operated after that, though.

The less elaborate facade than originally planned on the Ashland Avenue house was probably due to cost overruns resulting from the delays, and from work that had to be redone (the building permit was revoked during construction due to code violations.)