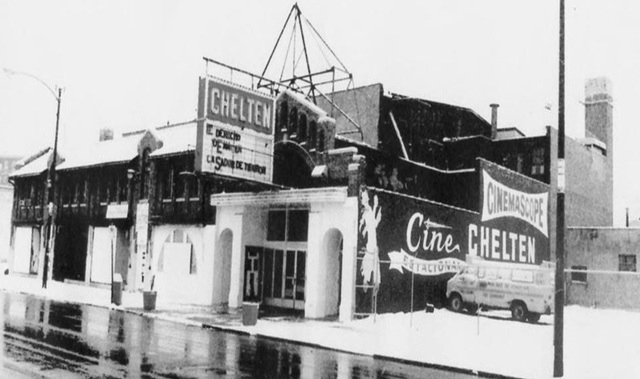 This movie house in the South Shore neighborhood of Chicago opened on January 21, 1928. It was located on S. Exchange Avenue, near E. 79th Street.

During the 1940’s and 1950’s, the theatre was run by Gollos Brothers Theatres. The Chelten Theatre closed in 1978 as a movie house, last showing Spanish-language features. It served as a church for many years after closing as a movie theatre.

Doea anyone know what happened to the Evergreen Theaters (there were three screens); the Jeffrey and Beverly?

I recall watching with my friends “How I Won the War” and “The Battle of Britain” at the Chelten Theatre back in the late ‘60s and early '70’s.
My band The Tellstars also performed there in conjunction with an appearance we had made at the Gayety Theatre in South Chicago.
According to news reports, the Gayety Theatre was gutted by an arson fire in May 1982 and the Chelten was the only theatre left in the area, but it closed down as well. Both theatres at one point were leased or owned by Ricardo Ruiz and his wife who apparently didn’t want or know how to maintain these precious historical land marks.
For more information, please visit www.tellstars.com

Thanks for the info Mike. The Chelten was my neighborhood theater, having seen “Funny Girl”, “Hello, Dolly”, “Anne of a Thousand Days”, “The Out-of-Towners” among many others. Good memories. Never went to the Gaiety since I didn’t speak Spanish, but I loved the banana ice-cream they sold in the long carboard containers.

My late mother collected dishes – a rose pattern – on “dish night” from this movie theater in the 50’s. Does anyone remember that or why they gave them out?

Dishes were a popular premium back in the 50’s that movie theatres used to lure people back each week to the show. One week you’d get a cup and if you wanted a saucer you’d have to come back the next week—and so on and so on.

Here is a nice article and photos of the Chelten

Cool article on the Chelten Broan.

Thanks for that information rivest266.