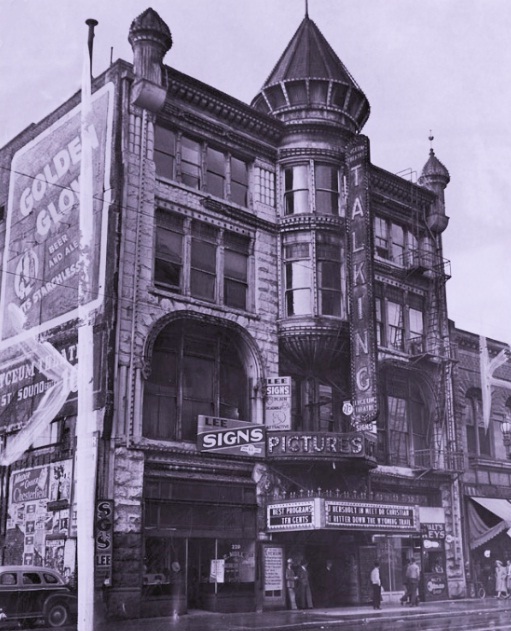 Here is a circa 1930s photo:
http://tinyurl.com/luonxp

This is part of a January 1922 article in the LA Times:

Purchase of the Douglas Building at Third and Spring streets as a city hall annex was recommended to the City Council yesterday. A committee has been appointed to investigate the buildings offered to the city for the housing of offices now located in the Normal Hill building, which is to be razed to make way for the new $1,500,000 Central Library.

This was in an LA Times column by Lee Shippey in November 1930:

The new theater on Broadway between Sixth and Seventh is to be called the Los Angeles Theater, and the announcement says â€œIt is the first theater to be named in honor of the cityâ€.

Jay Hunt, veteran actor, writes us that â€œin 1890, my wife and I appeared in the Los Angeles Theater on Spring Street, the same that is now called the Lyceum and is a picture house. Maude Granger, then a very popular actress, was the star. Harry Wyatt was manager of the theater at that time. We played a three-night engagement, but changed the bill every night because the city then wasnâ€™t big enough to provide more than one good audience for each play.â€

Here is a 1913 LA Times article about the re-opening of the Lyceum:
http://tinyurl.com/y7fls7g

The Los Angeles Herald of September 3, 1905, ran an article about Los Angeles architects. It credited the design of the original Los Angeles Theatre (by then called the Orpheum) to architect J. Lee Burton.

Burton was one of Southern California’s most successful architects in his day, designing many buildings in the then-popular Romanesque Revival and Queen Anne styles. He used an odd and rather awkward hybrid of the two for the Los Angeles Theatre.

If a theater called the Los Angeles is listed in editions of Cahn’s guide from the years around 1907-1910, it would be the theater listed at Cinema Treasures as the Capitol.

This reopened as the Lyceum theatre on July 9th, 1911. Grand opening ad posted.