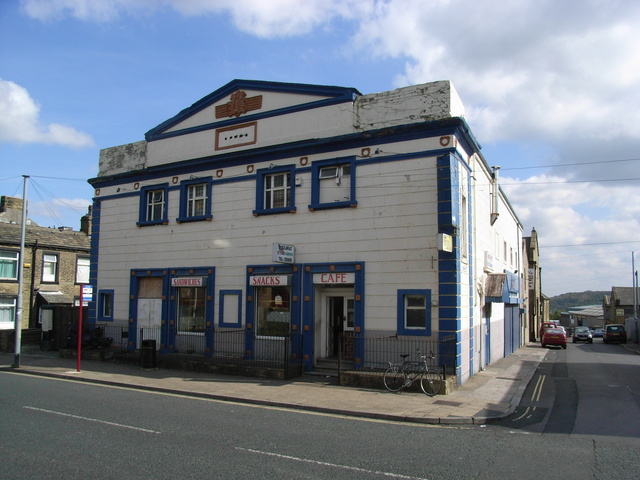 The Halifax Cosy Corner Ltd. was registered as a private company on 16th October 1913, with capital of £4,000 in £1 shares. The first directors were A. Helliwell and H. Wright, both of Halifax.

Located 1 mile west of the town centre, the Cosy Corner Picture House was opened on 24th October 1914, with approximately 700 seats and two projectors: one by Powers and the other by Pathe. The proscenium was 30ft wide. The first manager was Reg Watson; he was replaced in April 1915 by Herbert Upton from the Hippodrome, Bingley.

When the ‘talkie’ era arrived, British Thomson-Houston(BTH) sound was installed. At some stage the cinema became part of the M.P. Cryer circuit and in the early-1950’s it was acquired by the Leeds based Star Cinemas chain. CinemaScope was installed in 1954, with the seating capacity being reduced to 623. But it became increasingly unprofitable, and was closed on 24th May 1964 with Doris Day & James Garner in “The Thrill of it All”. No great ‘thrill’ for manageress Mrs. E.H. Dean when she locked up for the last time.

By 2007 the building was occupied by a sandwich shop; in 2014 it was the Queens Road Pharmacy.

Way back in the late 50’s I began my career in the cinema industry as a news boy carrying the Movietone newsreel between the Halifax Cosy and Palladium cinemas in Halifax six evenings a week at 1 shilling (5p) per night.

The projection room was really small up two steps from the rewind room which was immediately behind the paybox. Projection equipment was two aging Kalee 12 machines