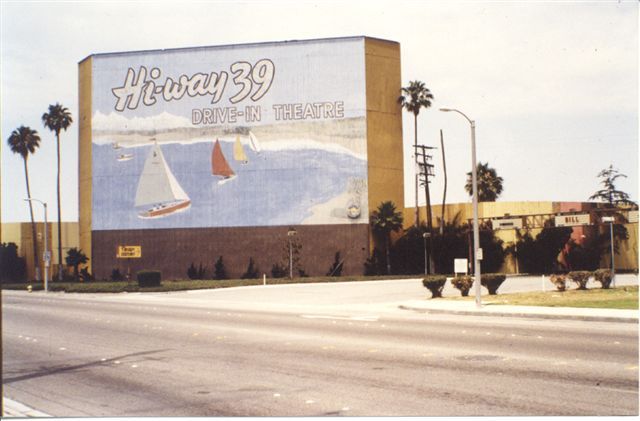 When it opened on June 29, 1955, the Santa Ana Register called this one of the largest drive-ins in the West because of its 1,600 car capacity and a screen almost ten stories high. As Orange County’s fourth drive-in, this Pacific Theatres' snack bar was six times larger than normal and had counter space almost a quarter block long. The opening attraction was James Stewart in “Strategic Air Command”. It became a 4-screen theatre on June 15, 1979.

When it closed on March 31, 1997, the 56-year history of Orange County drive-ins came to a close. Out of eleven drive-in locations in Orange County beginning with its first, the Orange in 1941 to the Stadium built in 1970, the Highway 39 was beaten only by the Orange Drive-In in its longevity but it has the distinction of being the last to go, outliving the seven ozoners that were built after it. Among the movies playing on its four screens on closing night were “Private Parts” and “Beavis and Butthead Do America”.

A Lowe’s and Wal-Mart store were later built on the site by the real estate division of Pacific Theatres.

Capacity in 1963 was 1900 cars. Pacific Theaters was the operator at that time.

Then I would have to call Willie Nelson.

Here is a December 1959 ad from the Press-Telegram:
http://tinyurl.com/26dggp

Here is a grand opening ad from July 1955:
http://tinyurl.com/2edgwh

I went to Santiago High School in Garden Grove and lived off Trask way before being a projectionist. How horribly sad this is.

If you enter the theater address on this site, you will see a 1972 aerial view. The 1953 view shows only farmland, while the more recent photos show the retail development.
View link