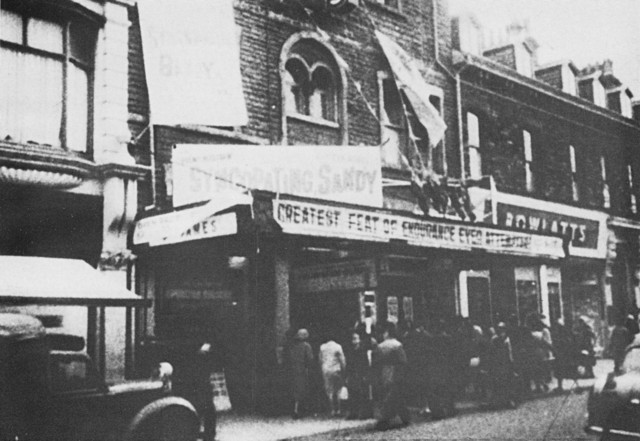 A conversion of a building originally built in 1882 as a club room for the Harrogate Conservative Club. For 20 years prior to cinema shows the building had been used as a sale room. It opened as the St James Cinema in mid-April 1907 and closed on Saturday 19th May 1960 with “Blind Date” and “Doctor at Sea”.

The building was converted into a Thrift supermarket but demolished early this century and a brand new Marks and Spencer store was built on the site, opening in November 2005. The St James cinema backed onto the Central cinema - the new M&S store occupies the site of both.

I recall standing outside listening to ‘Syncopating Sandy’ playing the piano on his endurance attempt, on seemingly massive speakers placed in the street outside. Since it closed in May 1960 and I was just ten years old then, the earlier event with said Sandy, I must have been quite a bit younger then. I think we as a family watched Kenneth More and a very busty lady who’s name escapes me in ‘The Sheriff of Fractured Jaw’ there in the 1950s. I think my late Dad must have been keen to see it (her?). Your potted history is nice but remember that initially the premises were converted to the early ‘Thrift’ supermarket before M&S moved along Cambridge St from their original store further down, much later on in the 1980s. Lowther Arcade was lost at this time, very sadly and much missed by me anyway.