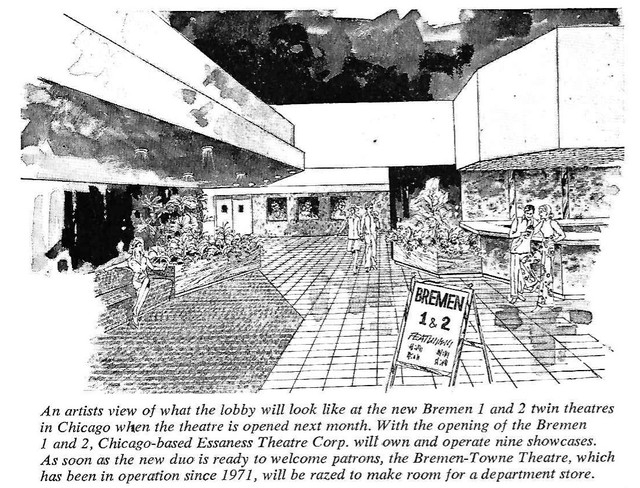 Opened on January 29, 1971 as a 1,023-seat single-screen theatre in the then-new Brementowne Mall, the Bremen Theatre moved to the other side of the shopping center on July 19, 1974 when it re-opened as a twin with Lucille Ball in “Mame” & Clint Eastwood in “Thunderbolt & Lightfoot”. The original single screen was demolished to build a department store. The twin theatre was later rebuilt as a quad.

It began to decline in popularity when a much larger and more modern multiplex opened at the Orland Square Mall a couple miles away a few years later. The Bremen was increased to six small screens around this time, and switched from first-run to second-run fare and bargain prices in order to compete.

After many years as Tinley Park’s only movie house, and building a steady and loyal customer base, its owners, Value Theatres, recently sold the Bremen to the Menard’s home improvement store chain, which operates a store next door to the multiplex. Menard’s plans to expand into the former theater space, which will be completely gutted.

The theater went out in style, the weekend of July 25-27th, 2003, with dollar admission and concessions, causing lines to snake into the now nearly-empty shopping center.

I don’t know when the Bremen went to second run, but I remember going there in high school in the late 80’s, and by this time it was second run.

Bremen was a great theatre. I have many fond memories there from my childhood. It’s sad to know it’s no longer in operation.

I went here once. It was a decent place: similar to the Belvidere in Waukegan and very much a blast from the past. This was probably around 1999-2000.

Because this theatre was an Essaness, per Bryan’s comment above, was it ever a Cineplex-Odeon?

My memory is that after the merger it was in the C-O listings for a while before going independant.

I’m not sure what the last movie I saw at Bremen was, but I know we rode our bikes there to see Terror in the Aisles and my friend Pat’s mom drove us there to see Cannonball Run 2. I mostly remember the mall itself and the drive around the mall that most teenagers did.

According to this article in Boxoffice of August 30, 1971, the BremenTowne Theatre opened as a single-screen house. There is a photo of the 1,023-seat auditorium. The house was designed by the architectural firm of Robert Taylor & Associates.

For what it’s worth, newspaper articles from 1971 also call the house the BremenTowne Theatre, spelled and capitalized exactly the way Boxoffice did it. A Chicago Tribune article from as late as January 19, 1994, still called it the Brementowne Theater.

Both CinemaTour and our description say that the theater was moved to the other side of the mall and rebuilt as a quad at some point. DeadMalls has a page for the Brementown Mall which says pretty much the same thing, but it also says that the Mall opened in 1973, which means the theater would have predated it by two years.

The exterior photo and an architectural drawing illustrating the Boxoffice article show an outside entrance to the theater, so I suspect that DeadMalls is right about the mall having been built in 1973. Whether the original theater building was demolished or incorporated into the mall and converted to another use, I don’t know. All the information available on the Internet is pretty sketchy.

If the theater did move from the west end of the mall to the east end when the mall was built, then we actually have two entirely different theaters of the same name here. The house that opened in 1971 was a big, impressive theater. It would have been terribly wasteful for it to have been demolished, or even converted to another use, after only a couple of years, but it looks like that might be what happened.