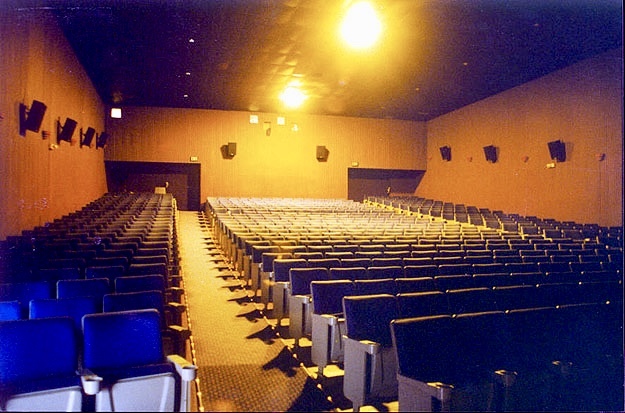 General Cinema’s (GCC) Northpark East III & IV was the cousin to Northpark I&II coming online in 1974, nine years after the original twin, and just a bit over a quarter of a mile away. The theater was a success running just shy of 25 years. The original Northpark “West” I & II had changed movie-going forever begnining in 1965 in Dallas as the Downtown zone began a rapid descent and moviegoers went north to Dallas’ “Central Zone” of movie exhibition. But Northpark had company with other road show theaters including the UA 150 (1968) and Interstate’s Medallion Theater (1969) joining the veteran Interstate Wilshire Theater.

To reduce the strain on bookings, GCC decided to open a second twin Northpark theater. But with space tight on the west side of US 75 adjoining the wildly popular Northpark Mall, GCC headed east to a newly created spot in Northpark East created by the same folks who owned the mall, Alfred Nasher. The white brick theater was called the Northpark East III & IV and at the outset had premiere films and by the end of its lifecycle often was the downgraded location for films moving from the I&II though also having repertory 70mm film screenings.

The Northpark III & IV opened Nov. 1, 1974 with the films “Gold” and “Law and Disorder.” The theater was obscured somewhat by an adjacent outparcel building hurting view from busy U.S. 75. Meanwhile, Nasher’s architectural sensibilities would not allow for gaudy attraction signs so common to other GCC properties. Granted, the theater was classy and certainly not pretentious. Its style was harmonic with the Omniplan Northpark architectural jobs on both sides of the street. But, frankly, the new theater was a bit challenging to see. This would get even worse in 1977 when Nasher decided to build some high-rise buildings adjoining the two existing buildings. These buildings would completely obscure the theater from Park Lane which was the east-west road passing by the theater. For unsuspecting patrons showing up at the incorrect Northpark I & II, the directions to the III & IV could be frustrating and time-consuming depending on where your car was parked at the mall.

GCC stated that the two Northpark cinemas were the highest grossing theaters in the state of Texas for many years. And in 1984 it would purchase the Plitt Cinema within Caruth Plaza to have three theaters in close proximity. But the Northpark III & IV and Caruth Plaza Cinema got tremendous competition when the eight-screen AMC Northpark / Glen Lakes began operation half a mile away in 1988 and United Artists debuting its destination showplace, the UA Plaza right across the street from the III & IV and just behind the Caruth cinema early in 1989. All of the theaters brought their A-game moving people briskly and with great care through the ticket lines and lengthy concession lines. GCC’s response was to update both the III & IV and I & II in projects completed in 1989.

In 1992, GCC closed the Caruth Haven complex and its 70mm capability was added to the Northparks’s Cinema IV four meaning that 70mm could potentially be playing at all four GCC Northpark auditoria. Also in 1992, the III & IV was the first theater to try a reserved seating experiment with Ticketmaster. The theater roped off seats which would be held in reserve for Ticketmaster advance purchases. Same day Ticketmaster purchases added $1 to the cost of the seat which advanced day tickets were $1.35 from any Ticketmaster outlet or $1.85 for Ticketmaster by phone orders. This plan was a bit ahead of its time and a similar concept devised for Internet movie ticket purchase proved more successful.

Thanks in part to the GCC Northparks, the Central Zone was easily the most popular exhibition zone. But bad news was ahead for the aging twins in the 1990s and the ‘plexes at the turn of the century. All of the Central Zone theaters would fall into hard times as moviegoers flocked to a new breed of 24- and 30-screen megaplexes in the DFW area. The AMC Grand (1995) took its toll and up and down U.S. 75 theaters came online including Sony’s Cityplace (1995) to the South and Sony’s Keystone (1997) to the North. A small ray of light occurred for the III & IV on January 10, 1997. The DART Red Line train would be extended to Park Lane with the train’s temporary stop being the parking lot right behind the Northpark III & IV which the theater promoted. But that wouldn’t provide the needed uptick for the theater or its competitors in the Zone.

Weekday attendance was woeful for this location. Not surprisingly, the first shoe to drop within the Central Zone was the GCC III & IV shuttering June 28, 1998. For employees hopping across the street to the Northpark I & II, it would close next just four months later in a rash of GCC closures around the city including Carrollton, Collin Creek Mall, North Hills, Town East 6, and White Settlement. The UA Cine (2000), Medallion (2001), Plaza (2005) and the Glen Lakes (2006) would also go down for the count. An AMC theater inside of the Northpark mall would open (2006) carrying the Northpark cinema nameplate forward while the III & IV building would be transformed into Art Institute of Dallas space including a culinary school which was going strong into the mid-2010s.

This Theatre closed on my Mom’s Birthday

I was a Chief of Staff at this theater in the early 80s. Actually got the “Revenge of the Jedi” posters and lobby materials delivered and had to send most of it back.

The GCC Caruth Plaza closed in January 1992 on the same day as my theater, GCC Valley View I and II. By then the UA Medallion had closed and reopened as the Trans Texas Medallion dollar theater. My first gig as an official General Manager.