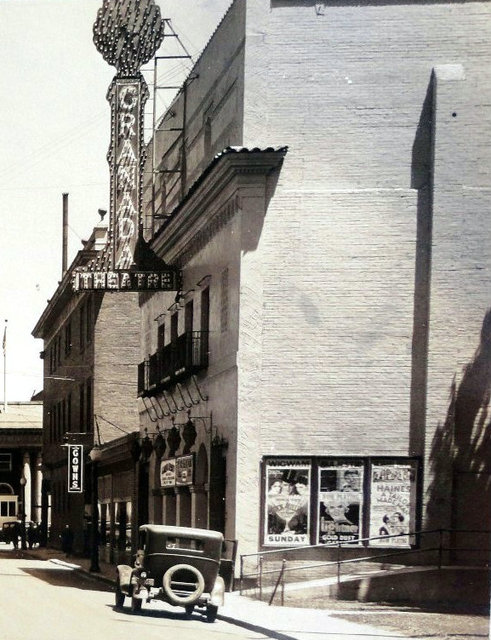 A nice old theatre with a beautiful red curtain on West 1st Street in Reno. It was opened as the T & D Theatre, and in 1915 was the Rialto Theatre. In 1926 it was re-named Granada Theatre, and was part of the T & D Jr. Enterprises chain out of San Francisco, California. It used to have a balcony, but that was later enclosed for a second screen. It had a beautiful blue neon sign in front. The lobby was done up in blue. The carpets in the theatre proper had a carpet with the UA cinemas logo (of course not original).

Bought out by UA and demolished in the mid-1990’s.

I have created a Flickr group for any photos of the Granada or any employee related events. If you have any photos of the Reno Granada/UA Cinema 1 & 2 please post them here. Please list people if you know who they are.

I wish I had taken pic. but I didn’t. If there are any out there during the time line of the 1960’s I would love to see them.If I remember right the Mgr name was either Mr Shuck or Shock something close to this ,not sure.

Does anyone know what happened to David Stewart? I worked with him and curious of what he is doing.

I was looking for David Stewert also, but I have not located him even on Facebook. I thought it would be fun to talk of old times.

The March 8, 1916, issue of The Moving Picture World had a couple of paragraphs about the T & D circuit’s theater in Reno, which had opened recently. I haven’t yet been able to establish a definite connection between the T&D house and the original Granada, but I suspect that they were the same theater. The T & D was reported to have 1,600 seats, and the original Granada certainly had a large enough footprint to accommodate that many. The only other candidate, the Majestic, was built in 1910.

This weblog post, mostly about the Majestic, says that the Granada opened in 1915 as the Rialto Theatre and was renamed the Granada in 1926. It might have been called the Rialto for a while, but all the first Turner & Dahnken houses in a given city that I’ve come across so far were originally called the T & D Theatre.

Here are the paragraphs about the unnamed T & D house at Reno from the 1916 article:

“The Reno, Nev., house of this concern, representing its first venture outside California, was opened a short time ago and has been doing an exceedingly heavy business ever since. The opening attraction was ‘The Ne'er-o-Well’ and at the opening performances the crowd could not be handled through the main entrance, necessitating the use of the exits. Governor Boyle, Mayor Byington and many men prominent in the political and commercial life of the State were present at the opening and brief speeches were made, the firm of Turner & Dahnken being represented by E. B. Johnson. Later a banquet was tendered by R. L. Fulton, of the Reno Amusement Company to the stockholders of the concern and the honored guests.

“This theater is the finest in the state of Nevada and was designed by architect George A. Ferris. It has a seating capacity of more than 1600, about one-third of the seats being in the balcony. Music is furnished by the magnificent organ which attracted so much attention last year in the Palace of Mines at the Exposition at San Francisco. The new house is under the management of R. G. Hunter, formerly of Vacaville, Calif.”Architect George A. Ferris established his practice at Reno in 1906, and became one of the region’s leading architects, designing such landmarks as the El Cortez Hotel in Reno and the Governor’s mansion in Carson City, as well as a large number of the public schools in the region.

Like so many UA theatres they kept on twinning the place. I think this cinema got flooded out many times from the Truckee River nearby.