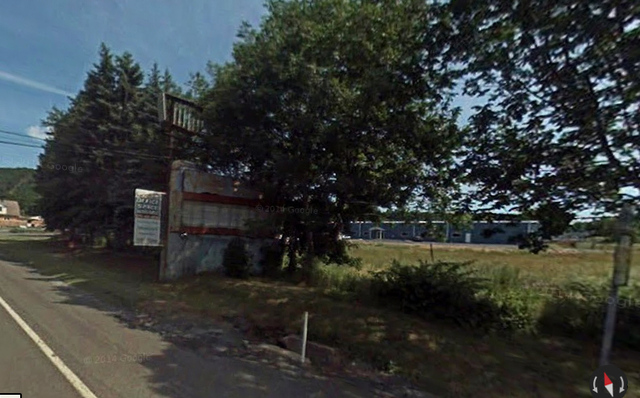 The Valley Drive-In was a one-screen theatre located along PA Route 309 just north of the Still Creek Reservoir near Hometown. It opened on May 1, 1949 with Randolph Scott in “Coroner’s Creek”. It was closed in 1987. The drive-in was also affiliated with a large swimming pool that was known as the Valley Pool, which was located on the same property immediately north of the movie screen. This facility was a favorite for all-day swimming, picnicking and a night-time movie. The Valley Pool closed in 1988.

It appears that the concession stand/projection booth is still standing.

Yes Kenmore, you can see the concession stand/projection booth in the most current Google image. The pool’s been filled in but the changing rooms and snack bar were in the structure at the north end, and that building looks to still be there.

Looks like the marquee is still standing as well, though it’s lost its luster.

I just want to give a little quick on-the-spot correction here, having some first hand knowledge about the “Valley”. The Drive in theatre was constructed in 1948 and ran its last show at the end of the 1987 season. We did open late in 1977 when the wooden screen-tower was ripped down by a hurricane on Palm Sunday! I couldnt belive my eyes! We rebuilt it wiht steel and opened in June. The swimming pool was added in 1954 and outlasted the theatre by one year closing after the 1988 season. Not a bad run for a place that was built by one man and his wife. The stand and projection booth are still up and have been used as an electronics shop and now as a maintenance building. and the markee was converted to an electronic digital billboard. As for the pool it is in fact filled in. The bathhouses are still which were located at the base of the screen-tower. This structure was converted in to electronic shops and later apartments, I live on the top floor. Sincerely, Rogan IV

theshoe4 thanks for the info..do you have any pictures to share? 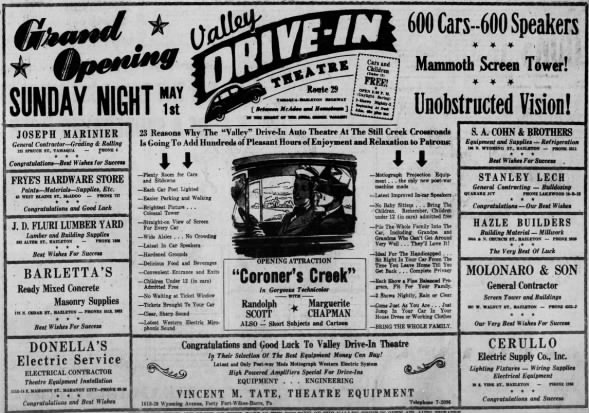