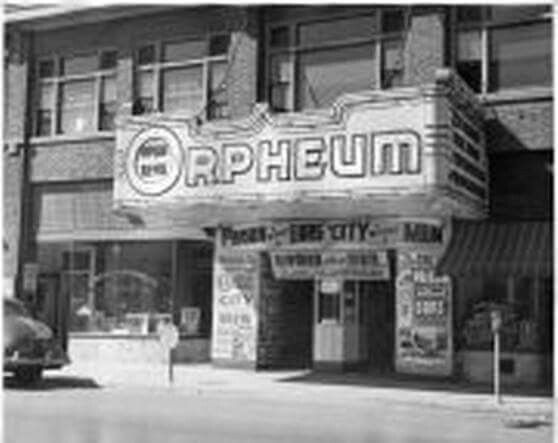 In 1973 the building burned, taking the front part of the adjoining Capitol Theatre with it. The original W. Center Street building still stands as the Paris Women’s Store. The south wall of the S. Main Street building remains, while the rest of the location is now a parking lot. During the 1950’s and 1960’s this was a second run theatre, and the next to the nicest theatre in town, surpassed only by the Chief Theatre.

It was at 151 S Main (also shown in some directories at 147 S Main) … but it was NOT next to the Chief. The Chief was on N Main. The parking lot shown in the photo above is where the Orpheum was. The building to the left (south) was a theater too. It was, for many years during the 1970’s and 80’s, Steven’s Stationers where I worked while going to college. I believe it was the Capitol Theater.

Capitol was on the corner on the same block as the Chief. The Orpheum was down the next block. I was a projectionist at the Chief during the late 70’s with Mann Theatres..