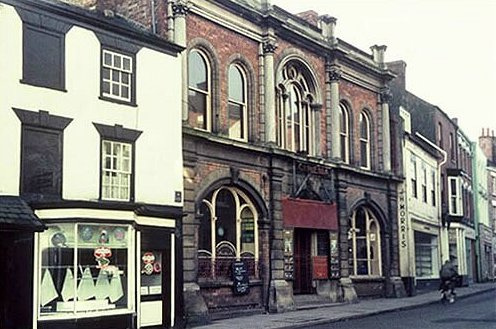 Located in Horncastle, Lincolnshire. Built in 1856 as the Corn Exchange, it was operating as a theatre by 1893, with 500 seats. In the 1900’s it became a silent cinema, but did not have a permanent projection box.

On 20th March 1922 it opened as the Victory Cinema (now with a fully equipped projection box). In 1930 it was equipped with a Morrison sound system and showed its first ‘talkie’ “General Crack” staring John Barrymore. The seating capacity was reduced to 450, and the auditorium had been re-decorated in an Art Deco style. By 1944 an Imperial sound system had been installed and the seating capacity reduced to 378.

The Victory Cinema was closed on 28th March 1970 with Virginia McKenna in “Ring of Bright Water”. It was demolished and a Woolworth’s store was built on the site, in 2014 operated as a Co-Op Food Store.