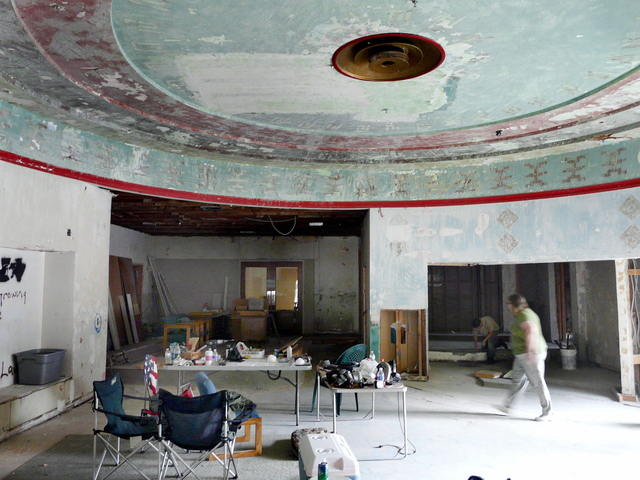 The Tower Theatre is located in downtown Marysville and opened January 17, 1941 with Gene Autry in “Carolina Moon” & The Three Stooges in “Quail Quest”. Located in a historic commercial district of an old gold rush town. Many beautiful brick buildings around it. Other historic sites include the Bok Kai temple and St. Joseph’s Church, a fine piece of Gothic style architecture built in 1853. About 10 mile drive from the Sacramento Valley auditorium.

It would be nice if somebody did some research on it. There’s not much about it other than that it was designed by a William B. David of David Associates.

Prior to the mid-1920s fire which destroyed it, the Marysville had been operating under the name Atkins Theatre. After the fire, for some time a small movie house called the Liberty Theatre occupied the location. There is a photo of the Liberty ca.1927 on page 121 of the Arcadia Publishing Company book Marysville, part of its Images of America series. The Tower, with its moderne design, apparently dates to the 1930s or early 1940s.

The Tower Theatre opened at First and D on January 17, 1941. The Liberty Theatre stopped showing up in advertisements in the Appeal-Democrat some time before the opening of the Tower, and both theaters advertised with the slogan, “The Family Theatre,” so I’m guessing that the Tower was a remodel of the new Liberty. But while I can find advertisements for the opening of the Tower, I haven’t found an article on its opening.

The first film at the Tower was Gene Autrey’s Carolina Moon. They advertised 1000 seats at 20 cents.

The last mention (in fact the only mention I can find) of the Liberty in Boxoffice is in the September 23, 1939, issue which mentions that the employees of the house had given operator Harry Hunsacher a birthday party.

The most recent mention of the Tower I’ve found in Boxoffice is a line in the March 7, 1958, issue which said that the house had been closed. The Tower had been closed for at least part of 1957 as well. The December 21 issue of Boxoffice that year said that it had been reopened by the United California circuit.

Here’s a photo of D Street north from 1st in the 1920s, showing the Tower’s predecessor at right. The source identifies the theater as the Atkins. Here’s a photo of the same theater dated 1908, when it was called the Marysville Theatre.

There’s no doubt about the opening date of the Tower Theater. I’ve got a photocopy in front of me of the Appeal-Democrat from January 17, 1941 with the advertisement saying:

I wasn’t questioning the opening date the newspaper gave. I was just disappointed that Boxoffice didn’t run an item about the event. The magazine ran very few items about Marysville’s theaters, unfortunately. Other towns in the valley often got better coverage.

The Tower Theatre will now be home to a New Museum. The “Yuba County Museum of History” has currently signed a thirty month lease for the front area of the Tower Theater in Marysville on D Street, and must complete remodeling work prior to opening hopefully by the end of this year, December 2011.

The foyer and lobby area will provide approximately 2600 square feet and allow the museum to showcase large artifacts and exhibits. The remainder of the old Theatre/Restaurant is unfortunately now an office.

A September 2012 photo can be seen here.

to KrynMCPromotions, if they need volunteers for the museum, please let them know im interested.

Opened January 17, 1941 with “Carolina Moon” supported by by The Three Stooges in “Nurse to Worse” and other short subjects.