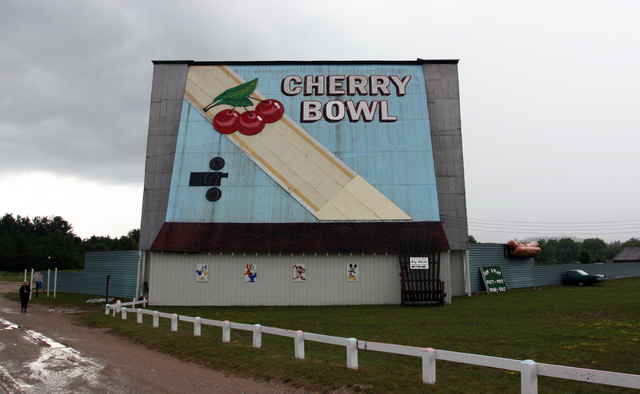 The Cherry Bowl Drive-In, so named for its location in Michigan’s northwestern cherry growing region (in fact, the theater is still surrounded by cherry orchards today), opened on July 4, 1953 with James Stewart in “The Greatest Show on Earth” & Barbara Payton in “Bride of the Gorilla”.

In the late-1950’s, its single screen was enlarged to accomodate CinemaScope features. The screen tower is emblazoned with the drive-in’s name, and three bright red cherries on a blue background. The screen is said to be the largest in the northern part of the state.

Keeping with the Cherry Bowl’s classic 1950’s theme, not only is a double feature screened, but vintage cartoons and features, as well. The theater’s season is May through September, and in keeping with its wholesome atmosphere, doesn’t show films with a rating higher than PG-13.

The Cherry Bowl Drive-In is more than a movie experience, however, with a 1950’s-themed minature golf course, volleyball courts, batting cages and kiddie playground on its property–even a 1950’s-style diner is located at the drive-in!

In 2003, the Cherry Bowl Drive-In celebrated a half-century in business, continuing to live up to its motto of “Fine Film, Food, Fun and Family Entertainment.”

Here is an August 1977 ad from the Traverse City Record-Eagle:
http://tinyurl.com/mdjxsg

I finally got to visit the Cherry Bowl Drive-In this year, and I must say it’s a Top 10 for pure nostalgists like me! Beautiful screen tower design, great pink and light-blue color scheme, speakers all over the place, and excellent snack bar with old photos of entertainers and the drive-in itself. If you’re in the mood for something different to eat, try a “cherry pizza” from the Cherry Bowl Gifts & Goodies shop next door. I got one with ham, pineapple and cherries; mouth-watering delicious!

Great ads wish i could have seen all of them,but I am getting greedy I know.

The Cherry Bowl is winner #2 of Honda’s ProjectDriveIn. They are getting a new digital projector. WOOP WOOP

I’m surprise they have not twined the Cherry Bowl yet. It looks like there is room for screen tower in back.

If it was ever just the Honor Drive-In, it wasn’t for long. The 1955-56 Theatre Catalog already showed it as the “Cherrybowl”, run by L. O. Griffith.

From Wikipedia: The Cherry Bowl opened on April 3rd, 1953. Longtime owner Jean Griffin ran the business after her husband’s death in 1959, and was known for working in high heels. Laura and Harry Clark purchased the property from Jean in 1996. Harry Clark died in 2012, and Laura continues to operate the theatre and diner.

The Cherry Bowl offers mini-golf and double feature films rated PG-13 or below. Harry Clark installed sculptures next to the theater’s vintage speakers and 14-foot neon hot dog. One sculpture is a pink and blue Volkswagen with a clown head on it, another is a pink cow with cherries for spots, and there is classic Chevy positioned to look like it is coming through a fence.

Wikipedia and some sources claim that the Cherry Bowl opened as the Honor, but I think I’ve proved the opposite. I’ve uploaded the grand opening story (buried on page 5) and the much larger grand opening ad from the July 3, 1953, Traverse City Record-Eagle. As you can see, it was the Cherry Bowl from its birthday on the Fourth of July.