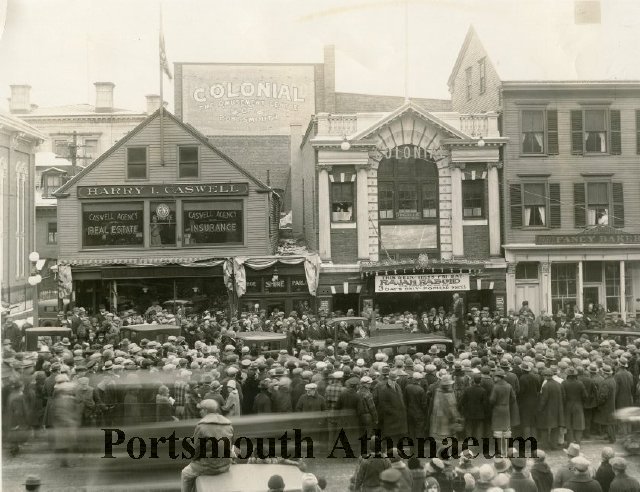 The Colonial building comprises of three smaller buildings. The farthest to the right was the Colonial Theater which opened in 1920. The mosiac tiles still say such across the entrance. The marquee is an obvious hint but this is just the lobby. The auditorium is gone.

Another piece of this same building was where Paul Revere met with locals to plan an attack on nearby Fort William and Mary. With the stolen gunpowder and munition, the rebels fought the battles of Lexington and Concord. The third chunk which makes this structure I don’t know anything about.

In 2003, it was slated for demolition. It went up for review and the historic commission said there really isn’t anything left to save.

The new building might look like the original Colonial Theater, now hidden under a thin coat of cement.

Eagle Photo, the business, is not closed. We plan to remain in business for MANY MORE years to come. Please DO NOT refer to the building as Eagle Photo. We plan to relocate within the downtown business district. Thank you, Cindy Williamson, Owner Eagle Photo

The lobby and marquee of this theater was finally demolished in late May of 2005. An ajoining building, possibly the one Paul Revere and others planned a raid of Fort William and Mary (known to many as the first act of the revolutionary war…) was also torn down. These lots and an ajoining parking lot are to be replaced with condos.

I used to live in Manchester, NH in the early 80’s and was in the AF Reserve and went to Portsmouth, NH quite a bit. I loved the old Colonial Theater in the center of town. It was closed, but there was a video store in the lobby and the owner took me into the theater to see it after hours. It was a beauty and could have been a wonderful performing arts theater, or maybe modified and tiered for a banquet facility. I know about the old Music Hall – I saw movies in there. But, why would the City of Portsmouth have ever let that theater be demolished – that is just wrong. Can someone please post pics of the Colonial Theater?? What a sad loss for NH.

When I lived in Portsmouth in the 80s, I frequently went to the Colonial Theater. If you arrived early enough you could park in the really small parking lot next door. In the lobby, the attendant actually melted butter in a small pan to put on the popcorn. The most memorable movie I saw at the Colonial was “Eraserhead”. I really miss this movie theater. While I occasionally went to its sister theater down the street, the Civic, now the Music Hall, the Colonial was my primary place to go any night of the week. There was a weekly mimeographed entertainment newsletter published for the city that would describe the films playing which I read with relish and would highlight the ones that sounded intriguing. It was there I saw so many great art and classic films.

The Theatre Historical Society archive has the MGM Theatre Report for the Colonial; it’s Card # 508. Address is “Main St.” There is an exterior photo dated May 1941. Condition is Fair. The report says it opened about 1920 and shows MGM films. It had 850 orchestra seats, and 400 balcony, total 1,250.